Rob Van Dam talks about helping young stars get over 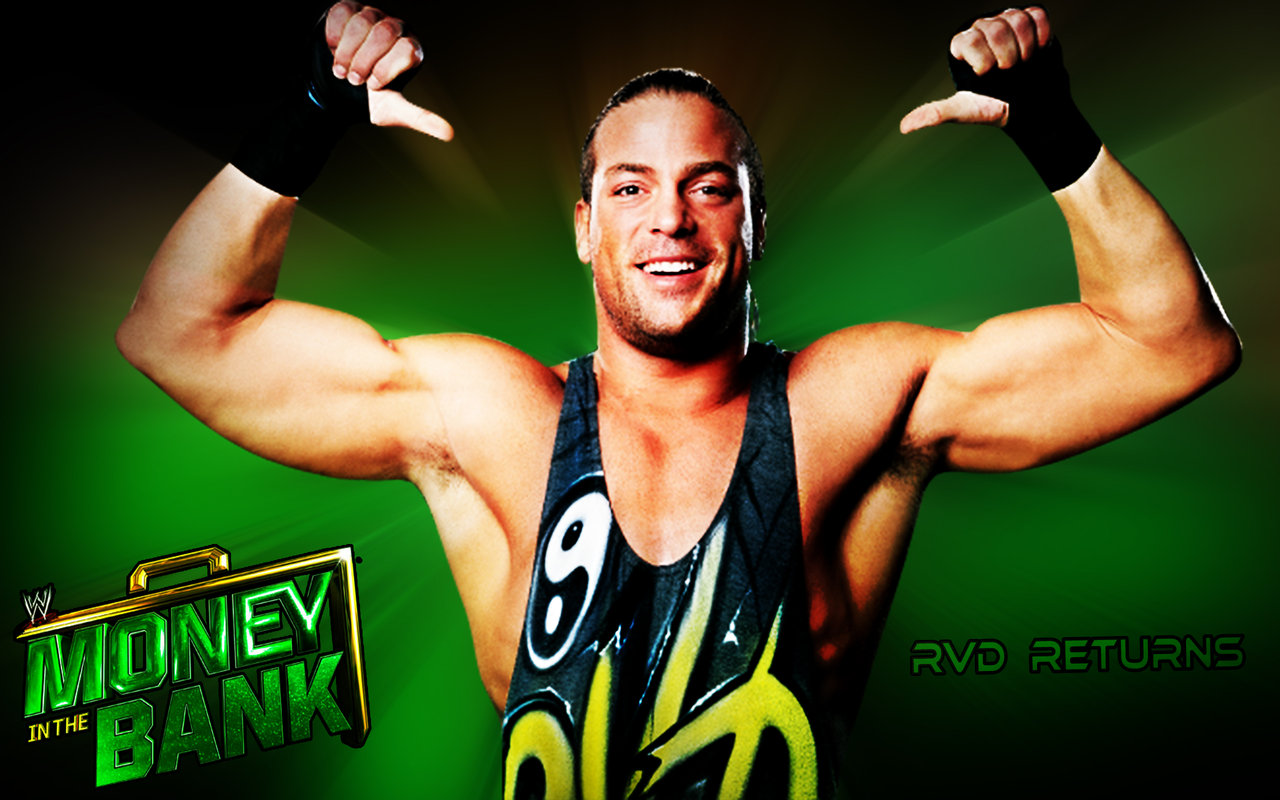 Bleacher Report Featured Columnists Mike Chiari, Brandon Galvin and Donald Wood had WWE, ECW and TNA legend ROB VAN DAM on the show in late June, and it was a great episode with plenty of exclusive content.

They talked about WWE Money in the Bank PPV, Paul Heyman, ECW, Hulk Hogan, his contract with the company and so much more.

Mike Chiari: Since returning to WWE for your latest stint you’ve had the opportunity to work with some of the company’s fastest rising stars, specifically Cesaro and Bad News Barrett. As a veteran performer do you take pride in helping some of these younger stars get over and reach their fullest potential?

Rob Van Dam: Yes and no. I place no focus on that. If somebody is willing to take some advice, then I have some, and that’s just life in general. A lot of people don’t want to hear anything. These guys, and everybody at WWE right now, is so good that the standard of the pro wrestler compared to maybe 10 years ago: night and day difference. I came back last year and I was so impressed. Guys that come up now through NXT, a lot of them, maybe most of them, seem to be growing up in the business and with only four or five years’ experience. They’re already 10-12 year veterans. I’m more happy, with the caliber rising, that I can still get in there with my style and ability and still be relevant with the new age of wrestlers coming up just like it was back then.

So, are they getting a rub from wrestling with me? Probably so, but these guys, I don’t feel like they need me. These guys have a great future and are heading to the top with or without wrestling Rob Van Dam, they just might have a few more bruises after wrestling me.

Rob Van Dam: The battle royals are usually among my least favorite matches. Of course the Royal Rumble is a very anticipated and popular pay-per view and it’s very important in setting up what happens that year with WWE, but for my personal participation, I like to keep the spotlight on me more.

Single matches, I feel, have always been the ones where I can shine more. Three-way, four-way, you have to split your attention with some other guys, and it can be totally great, but when you get into a battle royal with 20 or 30 other guys, it’s just so different from what your agenda is when it’s one on one competition. My preference is from the perspective of the guy putting the boots on, but really, if it works, it’s good. If the fans love it, I love it.

Mike Chiari: You obviously have a long history with Paul Heyman dating back to ECW, and you’ve once again had an opportunity to work with him during your feud with Cesaro. If a situation were to arise at some point that would allow you to join forces with Heyman again is that something you might be interested in?

Rob Van Dam: Possibly, you know, there’s a lot of factors to consider. Of course, whenever I’m working with him to any degree, I have to consider the possibility that some writers may be thinking of that idea just like you are. I would be open to considering anything, but I really do enjoy being a fan favorite, someone that gets the positive energy from the fans and all the love from those who are wrestling fans: guys my age, kids, women, whatever. I like that I have that appeal, and I like the love. That would be something, even within the parameters of entertainment, switching to bad guy, that those guys would put up with. All the negative energy that would occur if I were to switch. That would be something that has value to me, but besides that, of course I’d love to work with Paul.

Brandon Galvin: You’ve always been one of the most exciting and unique wrestlers in and out of the ring, which makes it difficult for fans to ever boo you. However, have you ever thought about playing the role of a villain again or do you think your in-ring style would make it too difficult for fans to turn on you?

Rob Van Dam: I don’t know. I actually started as a bad guy in the original ECW, back in ’96, because I was wrestling Sabu, who all the fans loved and treated like a god. With the thumbs pointing at myself, that was done in an arrogant manner to draw heat from the crowd and they seemed to love it, they seemed to love my moves.

I don’t know if my style makes it hard to get fans to not appreciate me, but I do think that the traditional hero is something that is old fashioned in somewhere like the Deep South. I remember wrestling in Georgia, and as a good guy—to get the audience behind me—you just walk out and clap your hands, you get the fans to clap with you and you smile. When I first went up to Philadelphia, if I tried that stuff up there, they would boo me out the door. So that kind of anti-hero or that more adult approach has taken over.

The Attitude Era, ECW, everything together has come to make wrestling not so old fashioned, which I could say was cheesy by my standards and had to evolve, so now the fans tend to be drawn more toward what they find entertaining, which is subjective.

Donald Wood: When you returned to the WWE, there were a lot of reports about your contract with the company. While it appears you won’t be going for the major titles in the company as a part-time wrestler—at least right now—you have much more free time to explore other ventures outside the ring. Has it been difficult trying to adapt to the new style of part-time wrestling with the WWE?

Rob Van Dam: I have never been one of the guys that goes crazy at home. I can’t even imagine what that’s like. I need the balance. WWE knows I walked away from them in 2006, [that] I stayed away for six or seven years [and] that I’m capable of that without question. The other wrestlers, they have a few days off and they go nuts.

I remember, even when I was injured, I had my knee surgery and was home for 12 months, but I wasn’t just sitting around, I had a lot of conventions and things, but I would get phone calls from some of my friends from wrestling saying, ‘Rob I know you’re going crazy at home, but you’ll be back on the road in no time,’ and that’s when I realized how different they are from me. I love my time at home. I need that balance. That’s why I left before, and that’s why this schedule is what works perfect for me, so I don’t have to adjust to the busy times.

We just did 17 matches in 23 days in my last run when we went to Europe and I did NXT in Florida as well as Raw and Smackdown. That kind of time for me is when I count the days until I get a break, always have, and some of the other guys have nothing waiting for them at the apartment anyways. They’re young and they’re looking to show people what they’ve got, I’ll let them have it. I’m happy with my position and the way WWE is treating me right now.

Mike Chiari: You’ve faced most of the top stars in the business over the past two decades, but who is someone who you either haven’t wrestled at all or have only wrestled sparingly that you’d like to work an extended program against in WWE?

Rob Van Dam: Hulk Hogan. Bring Hulk Hogan back, I want to work with him.

I don’t really worry about those things. When people ask me about guys I don’t say yes or no, but I go where the money is. Any chance I have to be a main event at a pay-per view, like main eventing WrestleMania, is that important to me? At this point, it’s something that would be really nice.

Brandon Galvin: Not many fans know about your roles outside the ring as an actor. One of my personal favorites was when you appeared on City Guys in the late 90’s. With the success of WWE Studios, would you be interested in appearing another film?

Rob Van Dam: Yeah, totally. I actually have several projects back in LA that are on the table. Some of them are movie projects, some of them documentaries, some TV shows. And to me, for that stuff to happen is like letting out 50 balloons in the air and seeing which ones make it back down.

I regularly sign letters of interest with people who have given me offers and, nine out of 10 times, the projects don’t see the light of day. Sometimes they do. When they do, it usually takes a lot of years before they come to fruition. I like to be on the creative side of that also, helping create the story and produce it.

As much as I like the entertainment business, I hate doing auditions. I don’t do them. So when you don’t do auditions, you’re not going to get a lot of parts. I did plenty of auditions, but I’m at a point now where my time is limited, and I don’t enjoy doing auditions, so now I take parts when they’re handed to me. So there are a lot less projects for me, but I love to do them.