Sara Del Rey talks about EVERYTHING! 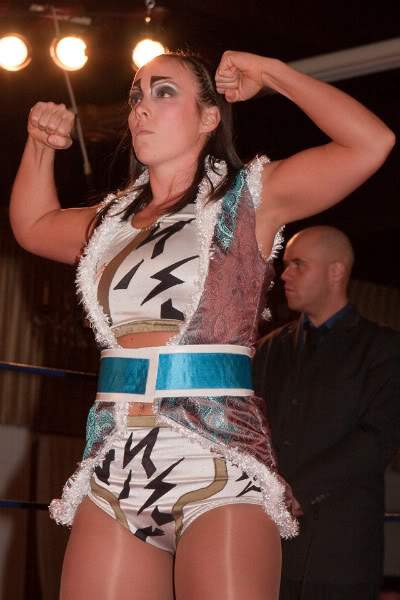 Sara Del Rey joined Jack E. Jones, Oneinchbiceps and Barbie Richards for the September 23rd edition of In Your Head Wrestling Radio. Sara Del Ray says she is doing fantastic, Jack says she has a big schedule coming up including a match with Daffney on October 2nd in Marietta, Ohio for Remix Pro Wrestling.

She wrestled Daffney a few months ago and her Pro wrestling game has improved so much from her WCW days. She’s looking forward to the match and thinks it’ll be a good show all round.

Jack asks if she’s seen NXT, She missed it because she was training. She says she saw the first weeks episode but has missed it since but says the first episode was tremendous. She heard CM Punk was commentary last night and bets it was superb. She notes Michael Cole has been great lately.

Barbie asks a question from a fan on the message board, asking what she feels about Daniel Bryan (aka Bryan Danielson) stealing her entrance music. He didn’t steal it but Bryan trained her and there was a point where she worked in Japan and she was told to use Europe’s “The Final Countdown”, but around the same time he decided it was a great idea and started using it. So when she came back to the States everyone thought she ripped him off. Then when she couldn’t use “The Final Countdown” at ROH, he said she should use “The Ride of the Valkyries” by Wagner but when they went to TV he wanted to use the music but couldn’t because it was hers. She guesses he wanted it again so decided to use it in the WWE.

Jack asks what is it like being in the ring with a woman who’s just into the looks side of wrestling. She kind of feels bad for them, because she would never want to go into a physical competition unprepared and unready against someone out her league. But it wont stop her from trying to do her best, she doesn’t just them but just feels bad they are put into that situation.

Jack asks when she’s going to get a match on one of ROH’s iPPVs on GoFightLive. Hopefully soon as there are big things to come into the women’s division for ROH.

Barbie asks a question from the message board about which is more deadly a kick from Sara Del Rey or an elbow from Chris Hero. She has no idea but maybe they should test it on a volunteer.

A caller asks if at any time she was asked to do a bump and refused to take it. She can’t recall any bump because she trains so much that she’s prepared for anything. She’s rarely in a situation where she doesn’t feel confident that she can take a bump. The same caller asks if she was trained by Antonio Inoki, She’s never met him but she was trained by Jushin Liger, Kendo Kashin and they always brought in amazing people to train with.

Jack asks about the Ribera Steak House. Sara says its pretty cool from the outside there are tons of pictures of legends who have eaten there, and the food was great. She notes that Chris Hero and Claudio Castagnoli got their jackets last year sometime and they decided it would be great for an entrance.

Jack asks about her time with Larry Sweeney in Sweet N Sour Inc. Sweeney is a fantastic and phenomenal character also in life. She was excited when they approached her with the idea and working with him was great as she had so much fun just watching him operate.

Barbie asks another question from the message board, about why she was trying to kill Hamada on Shimmer Volume 28. Sara wasn’t trying to kill her as the Japanese are built tough.

Jack asks a question from Facebook about her views on the current state of women’s wrestling. She thinks women’s wrestling is getting a lot of exposure which is good but a lot of it isn’t actual athletics, and hopefully with more exposure, more athletic girls will be accepted. She says she thinks its great its so popular right now as it just opens a lot of opportunities to women. It isn’t her favourite type of wrestling but any exposure is good.

Jack asks if she’s proud of Gail Kim and Awesome Kong main eventing Impact in 2008. She was proud as it was a huge step for women’s wrestling, Sara thought they did a great job, it just proves that everyone who said women can’t draw were proven wrong. She doesn’t know why TNA went in a different direction when it was proven they could draw. She said they set a standard and opened up a lot of doors and eyes for women’s wreslting.

Jack asks if she’s had any talks of going to TNA, Sara says they’re not interested.

A caller asks what it was like to face Awesome Kong in May at a ROH house show. She says it was cool and any time she gets to wrestle Awesome Kong is good as you know how she’s been trained and you can just go all out and don’t have to worry about breaking her plastic parts or anything like that. She tops off her answer by saying any time she gets to wrestler he is a pleasure.

One Inch Biceps asks what was up with the crazy eyebrows. Most people knew her from Shimmer as a babyface and to completely change her character around and trying to focus on anything but her looks. It would instantly set her apart and show people that she was angry, and it would make people look at her ability and not her looks. In a lot of ways the eyebrows did that, in the last year she’s gotten away from doing it just because the characters evolved. She thought it was a good statement for her character at the time.

Jack asks if promoters before have told her she should act more girly. The first time she was trained the guy told her its not who you know, its who you blow, She thought that was horrible. She isn’t super girly and doesn’t want to be something she’s not. But no one’s really told her she has to be one way or another, though she notes TNA did tell her she needs more of what the Beautiful People have, she kind of took that in to be more feminine but she looked at it and says they already have a roster full of it.

A caller asks how she likes teaming with Daizee Haze as opposed to wrestling her. The difference is she has her as an ally instead of an opponent, before they met Sara says she had such respect for Daizee’s in ring work and fearlessness, and now that she’s on her side she just really enjoys working with her in Chikara as well as other indy promotions. She thinks Haze is amazing and that she’s happy they are teaming together. She enjoyed their matches as opponents but it really suits them teaming together.

Jack asks what she thinks of Chikara, It’s one of her favourite places to wrestle as its so fun and there is such a friendly environment. Its a fun product to get into and look back at. They are always bringing in top talent and its awesome to get to wrestle for them as its a well respected company and she’s ecstatic to be apart of it.

Jack asks if there’s anyone she wants to wrestle which she hasn’t been able to yet. She says Aja Kong is her idol and wants to wrestle her. Jack asks if Aja Kong was someone she watched and said thats what I want to do. Sara says definitely when she first saw her she didn’t know women could wrestle like that, as she’d only been exposed to the WWE. So the first time she saw Aja she thought it’s definitely for her.

Barbie asks about the false starts of the ROH women’s division and has she noticed the change in response from the ROH crowd. It’s hard for to judge as she has a bad memory and she doesn’t worry what they have to say.

Jack asks her thoughts on Mickie James, She’d love to see Mickie on ROH as she would love to wrestle her as she’s amazing, she was sad to see her leave the WWE as she thinks she was one of the best parts of the WWE’s women’s division.

Barbie asks another question from the message board, about who she likes working Anarchy Championship Wrestling down in Texas. She likes working there as they have a lot of good female talent.

To wrap up the interview Jack asks a question from the message board about where she sees Shimmer from here, Sara says Shimmer’s opened up a lot of eyes to women’s wrestling so the sky’s the limit for Shimmer. She hopes to see them one day on National Television.
For full audio please visit http://www.inyourheadonline.com Live this week will be “Lita” Amy Dumas and coming up Mick Foley.

To join the IYH message board please visit: http://inyourheadboard.proboards.com/index.cgi