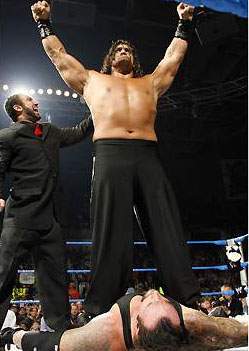 Welcome everyone. Sometimes, when talking about WWE superstar Kane, I say something to the effect “I think Kane is one of the bottom 5 big men workers in all of wrestling today”. The other day, I started thinking that I do not even have a real list. Does Kane really make that list? So I sat down the other day and made a listen of big men workers in pro wrestling and I have an official list of the five worst big men workers.

For the record, I do feel that Abyss is the number one big man worker in all of pro wrestling. He can adapt to any style and we have seen him do it successfully. He can do hardcore wrestling, have a solid match with Kurt Angle, and work around anyone that come around to him.

So let’s start this list of worst big men workers. We will start with number five and count our way down.

At number five, I am putting the Big Show. This should be not confused his entertainment value. Outside of the ring, he has pretty entertaining. He has not been funny in quite awhile, but the past shows us that he is capable. On the in ring side, I can’t think of what the last match he had was where I said “Yes! A Big Show match! This is going to be great!”.

Coming in at number four is a man from TNA Wrestling. His name is Rob Terry. He is big, bulky, and boring. It seems that every once in awhile TNA wants to push Rob Terry, then they get smart and don’t. Either way, the push is unwarranted and I have yet to see anything special about Rob Terry. Unlike The Big Show, I have not seen anything interesting of Rob Terry outside of the ring. If we were factoring mic skills and personality, perhaps this list would be different.

The number three worst big man worker today is Kane. So there you have it. Kane did in fact make the list. He is terrible. One thing that annoys me is that he actually has a world title because he is awful in the ring. His mic skills are terrible. However, at one point Kane had an interesting character. Since then, the character has all but vanished.

I name Kevin Nash as the second worst big man worker in wrestling today. I know most people will probably agree with me on this one. To be honest, most people will probably agree with the person I name as number one. Kevin Nash was never exceptionally great in the ring. Much like the Big Show, he had charisma and helped bring in the second pro wrestling boom by being part of the New World Order with Scott Hall and Hulk Hogan.

Listen to the latest show at sunsetflipwrestling.podomatic.com with a heavy push for my new Monday night show at 6pm on Dekadance Radio called Disneymagic Mix Radio. You can listen to it on Monday 6pm EST at www.dekadance-radio.com
Have a great week everyone