Home / Podcasts / Terry Funk on Between The Ropes

Terry Funk on Between The Ropes 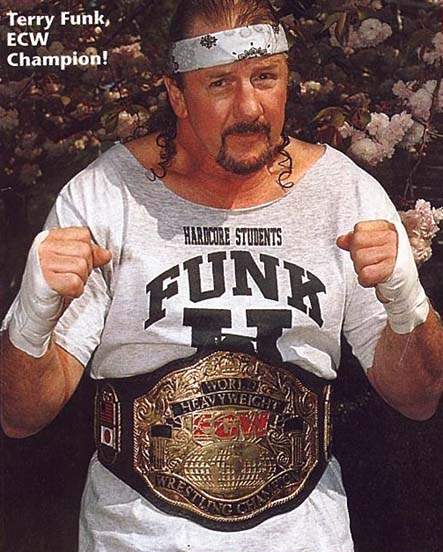 On Tuesday night, May 13, Wrestling legend Terry Funk joined hosts Brian Fritz, Dickerman, and Vito DeNucci live on Between The Ropes on ESPN Florida AM 1080 and AM 1060 to discuss his upcoming show in Redondo Beach, California, the independent wrestling scene, the WWE Hall of Fame, and much more.

Things started out with Terry talking about his selling of the famed Double Cross Ranch and why he had been out of wrestling for a little while. Terry responded that “I’m sizing down my world a little bit.” Terry also said that the nature of the wrestling scene was part of the reason for his absence. “To tell you the truth there’s a big difference between the independents now and what they were before. The independent scene has certainly changed over the last couple of years.”

When asked if he would consider working with one of the larger organizations in a creative role Terry joked that “I used to be middle aged and crazy, now I’m old and ornery or something. I have reasons for sizing down my world, personal reasons. My daughter had breast cancer and you’ve got to put first things first and family comes first.”

Terry returned to the topic of the independent scene, this time focusing on his own experiences. Terry said that he “made a damn good living at working the independent scene. It was very important to me to be my own boss…That’s why I have an attachment to guys like Raven and Sabu, those guys ran the same gauntlet as the Funker did.”

Regarding some of the challenges for startup independent promotions Funk said that many of the recent changes in the scene haven’t been good for business. “You can’t run with McMahon. You can’t start up an independent now. You have to make little indentions into the world of professional wrestling, minor indentions. Then you try to pick that up and then it might be something that starts to pick back up again. It’s not going to be an easy road, it’s a very tough road for independents.”

Next Funk was asked what he thought about mixed martial arts here in the U.S. since he saw its rise in popularity first hand years ago in Japan. Funk said that he’s a big fan and he sees it continuing to get bigger. He also mentioned that historically wrestling had started out as a sport and it came full circle into a form of entertainment. Funk said he hopes that the UFC sticks with what they’ve got and stays away from overdramatizing their product.

Terry was then asked to address the possibility of being inducted into the WWE Hall of Fame next year since WrestleMania will be in Texas. “I think it would be wonderful, but I’m not going to beg for it. I’d love to be in it, but if I’m not in it then I’m not in it. If I am in it then I think it’s a damn good deal. You have to remember what the Hall of Fame is. It is a wonderful thing, but it’s still Vince McMahon’s and what he wants to do. If Vince likes you then you’ve in there, if not then you’re not. And I’m not knocking that. If I had the power he does I’d do the same damn thing. You know, I hated Buddy Rogers and I’d make sure that son of a bitch was never in there.”

After some talk about who Terry feels should be in the Hall of Fame the interview concluded with a hysterical conversation between Terry and his dog Cooter Brown. While talking about his new DVD website www.FunkUDVD.com Terry’s dog started going crazy and Terry’s attempts to quite it down failed miserably in hilarious fashion.

To listen to the entire Terry Funk interview, including some discussion about West Texas State University and the large number of wrestlers it has produce, Terry’s memories of Bruiser Brody, as well as the entire May 13th edition of Between The Ropes in streaming audio, visit the show online at http://www.BetweenTheRopes.com. In addition to listening to this weeks show with Terry Funk you can become a site member and access hundreds of previous Between The Ropes shows and interviews. Join us for Between The Ropes for two hours every Tuesday night at 6:00pm ET on ESPN Florida AM 1080 and AM 1060 and worldwide on BetweenTheRopes.com.