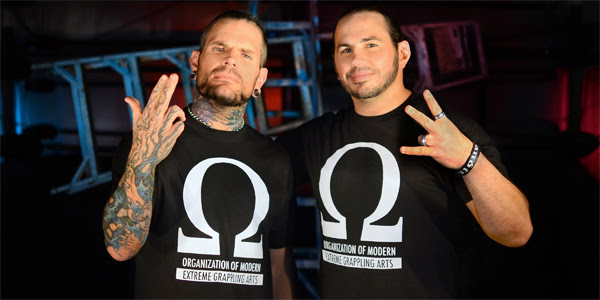 Welcome to The Armpit wrestling quiz for the week of March 13, 2017.

Lots of news this past week, with the main drama involving Matt and Jeff Hardy, where they will end up long term, and whether or not they can use their new gimmick.  Thought now would be a good time to do a quiz on none other than: “The Hardy Boyz.”

There were once again no winners to last week’s quiz, as everyone missed at least one or two questions.  I’ve tried to make this quiz a little easier.

1) In 1994, Shaquille O’Neal accompanied Hulk Hogan to the ring for his match against Ric Flair at WCW Bash at the Beach.

2) Notable about Kevin Greene’s match at WCW Great American Bash 1996 was Steve McMichael turning on him and joining the 4 Horsemen.

3) Karl Malone and DDP vs Hulk Hogan and Dennis Rodman at WCW Bash at the Beach 1998 left a lot to be desired because Rodman was hung over and almost fell asleep at certain points in the match.

4) Russ Francis, along with several other NFL stars, appeared in a battle royal at WrestleMania II.

5) When Floyd Mayweather punched Big Show in the nose, he didn’t mean to bust up his nose, but he really did, by accident.  Show later said he was so upset he almost strangled him, but he was probably half-working when he said that.

6) When Pacman Jones had to bow out of his tag team match in TNA, he was replaced by Xavier Woods, who teamed with Ron “R-Truth” Killings.

7) The angle to start the Bam Bam Bigelow vs LT feud was LT laughed at him for losing at the Rumble, causing Bigelow to shove him really hard.

8) Of the MMA fighters we listed, Chuck Liddell never did pro wrestling.

9) Tonya Harding was signed by AAA in 1994 to capitalize on her notoriety following the scandal with Nancy Kerrigan.  Jay Leno mocked the press conference, saying “Love Machine” Art Barr should change his name to the “Love Handle Machine” because of his minor belly fat.  Barr and Eddy Guerrero were among the best tag teams of the ‘90s, or any decade for that matter.  I saw them live at their peak, and the heat they generated was unlike anything you see today in any country.