The latest from LadySports & PGWA 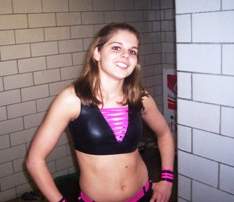 The LATEST from LADYSPORTS and the PGWA
Online now!It isn’t very often that a defending champion can find herself possibly considered an underdog. Particularly when that champion has held the belt for almost 3 years. But in the weeks leading up to this contest, Portia Perez had proven to have the number of one Nikki Roxx in contest after contest across North America.

Though having only been in the business for slightly more time than Nikki’s been PGWA champion, Portia Perez has done much to earn the moniker of International Superstar. And do not let her youthful innocence fool you: she is one of the most ruthless and determined women around.

Of course, Nikki Roxx would not be where she is today if she were unable to stand up to tough challenges. During her reign as PGWA champion, she has faced — and defeated — many of the best in the sport. With the stakes between them higher than they’ve ever been thanks to Roxx’s title being on the line, will that provide Nikki the extra motivation needed to finally defeat Portia?

The action is intense from the get go, and even after the bell sounds, passions continue to rage between these two fierce competitors. But in the end, one woman does manage to win this battle. But is this perhaps only the start of a longer war?

After the match, both Nikki and Portia share their thoughts on what’s just transpired, with one woman promising revenge.
LadySports/PGWA
http://www.ladysports.com