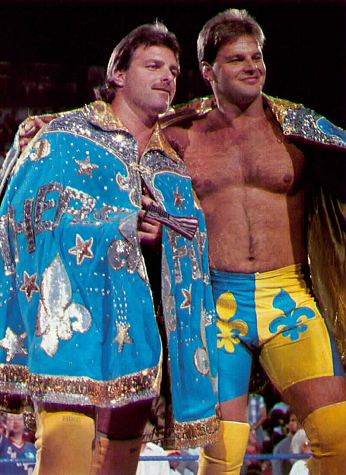 Oh the milk and honey did flow during the 1980’s, regardless of whether they were title contenders or not, this era of tag teams was treated with dignity; Windham & Rotundo, Sheik & Volkoff, The British Bulldogs, The Hart Foundation, Strike Force, The Killer Bees, The Rougeaus, The Young Stallions, Demolition, The Islanders, The Bolsheviks, The Brain Busters, The Rockers, Martel & Garea, Fuji & Saito, The Moondogs, everyone had a place and a purpose.

One of my favourite tag team rivalries was the Killer Bees/Volkoff & Sheik program from ’86ish-’87, I didn’t start watching wrestling until 1988 but I did catch up with a lot of video tapes dating back to 1984. I guess as a kid I was drawn to the cool KB striped outfits, Volkoff & Sheik’s villainous yet humorous verbal attacks against America, but what really drew me to this feud was the unusual, comedic cheating perpetrated by the Killer Bees.

Usually somewhere along the match when the Bees had exhausted every clean tactic to win a match, they would resort to wearing their masks, and behind the refs backs they’d switch in and out of the ring without making tags lol. The most memorable of all switches from the Killer Bees came at the 1987 Survivor Series when B. Brian Blair put on the mask and helped pick up the win for his team, which leads to my favourite memory of a tag team match.

The 1987 elimination tag team match between Strike Force, Killer Bees, Rougeaus, Young Stallions and the Bulldogs against The Hart Foundation, Demolition, The Islanders, The Bolsheviks and The Dream Team not only showed the might of the tag team division, but also presented a clear cut and distinct difference between the good guys and the bad guys. If I was watching that match for the first time, the imagery and contrast betwee the different sides, mannerisms and the style of wrestling would have made it a lot simpler for me to pick up the basics and join things in progress. Team Strike Force comprised of young, athletic, pretty boys with a lack of power houses (Davey Boy representing the Bulldogs was the only power guy on that team), good guy, scientific, high flying, clean styles. The bad guys comprised of primarily, big, ugly brawlers, the arrogance and cockiness of the Hart Foundation, the intimidating Demolition, the polynesian savages the Islanders, the foreign Bolsheviks and the ugliness of the Dream Team, the slow, methodical machine Greg Valentine, and the rough, power house Dino Bravo. The plot was clear as day, an uphill battle for the goodies having to use their talents and their minds to overcome the odds. The WWF did an excellent job at marketing their teams for the casual audience sake, everything from the look to wrestling style was executed with detail and authenticity.

I also enjoyed the 1988 Survivor Series elimination tag match with Powers of Pain, the Hart Foundation, The British Bulldogs, The Rockers & Young Stallions against Demolition, The Rougeaus, The Brain Busters, The Bolsheviks & The Conquistadors. With just 4 elimination matches on the 3 hour ppv, the tag team elimination match went on for an exciting 40 plus minutes. The Rockers made their ppv debut and were impressive, this was also the Bulldogs last appearance with the WWF and throughout the match you could see hints of their phasing out as Davey Boy & Dynamite weren’t as strong as they were in previous years. There wasn’t really much of a storyline going into the match other than the Hart Foundation/Rougeau rivalry, but by the end of the bout a storyline was born between the Powers of Pain and Demolition when Demolition’s manager Mr. Fuji turned against his own team and landing himself another managerial role with the opposing Powers of Pain in the infamous double switch. I was amazed that the Conquistadors – a tag team that had never been showcased as a dominant team as opposed to their peers were the last tag team eliminated.

By 1989, the tag team scene wasn’t as strong as it was in previous years, the Hart Foundation split into single competitors for that year, the overall roster was downsized so the Bees were split with Blair leaving the WWF and Brunzell remaining as an enhancement talent, the Bulldog as mentioned were gone after Survivor Series, the Bolsheviks were split as Volkoff left for a few months leaving Zukov to fend for himself as a lower midcarder, and the Conquistadors went back to jobbing. 1989 was still a decent year, Tully & Arn won the WWF Tag Team Titles, the tag team elimination match at the ’89 Survivor Series was abolished and the tag teams were broken off into normal elimination matches.

The ’80s was a great time to be a tag team wrestler, I recall reading an interview transcript featuring Rock n Roll Express great Ricky Morton where he said that in todays wrestling profession the lack of interest that the young wrestlers show in tag team wrestling comes directly from a mindset absorbed by greed and selfishness and a misguided opinion that tag team wrestling being inferior – a sad but true assessment.