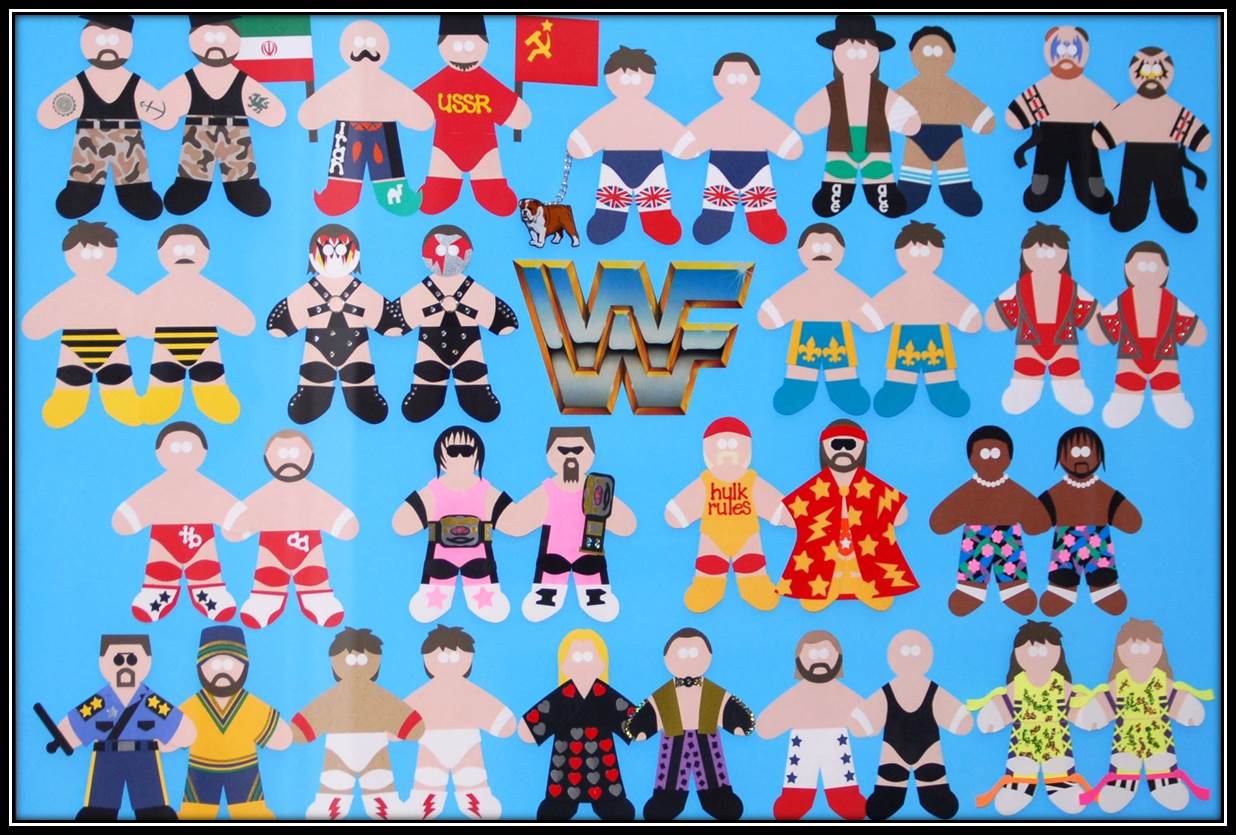 What drama in the WWE tag team division! The “team” of Cesaro and Tyson Kidd just defeated The Usos to capture the WWE tag team titles! It was a fitting conclusion for their long journey to the top of the tag team ranks, wasn’t it? Were they even a team 2 months ago? Maybe I am being cynical, but I wouldn’t be surprised if Tyson Kidd didn’t even know Cesaro’s real name yet. And these guys are WWE’s tag team champions?

Then, on a recent edition of Monday Night RAW, the WWE Universe was appalled to see Cody Rhodes turn on his brother, officially breaking up the team of Stardust and Goldust. It was a shocking turn of events! The former WWE world tag team champions were no more. A family torn apart!

It’s not quite the Mega-Powers exploding, is it?

I have nothing against these performers as individuals. Nobody makes it to the WWE without being top notch. But tag team wrestling is not about the individuals. It is about the TEAM. The coupling of two wrestlers joined side-by-side in their pursuit to leave a mark in this business.   Why is this so hard for the WWE to understand? Do they think these “swerves” and random title changes keep people guessing anymore?

I actually like the Usos because they have been a team for more than 2 weeks. I like their matching outfits and face paint, and my son and I even try to do their stylish tribal dance. The problem is when we shout to the neighbors “If we say Uuuuu”, they say……nothing. The Usos are ultimately forgettable. They’re good wrestlers but the value of tag teams has been so diminished that they, like the rest, don’t stand out in any historical context. Unlike, say, the Road Warriors…because even if you didn’t like pro wrestling in the 1980’s, you KNEW who Hawk and Animal were. You just did.

Look at it this way…it’s not a good sign for the continued direction of WWE tag team wrestling when the most exciting thing to happen in the past 12 months was the “reformation” of the Prime Time Players.

It’s not quite the Madness meeting the Mania in the Hershey Park Arena, is it?

The real shame of it is the Wyatt Family and the Shield were VERY close to making the WWE tag team division red hot again. Each team was different, unique, and interesting. The Shield felt futuristic and sleek…the Wyatts felt backwoods creepy. And just as they were becoming memorable what happens? The WWE breaks them up, of course. So now instead of more brilliant 6-man slugfests we get a steady diet of Erick Rowan jobber matches. “Well, you know, the Shield was together for over a year…what else could WWE do with them?!” A year? What in the name of Demolition is going on here?!?

I’m definitely guilty of thinking everything was better in the 1980’s. People romanticize the past, no question, so during a recent interview with Jerry Brisco I asked him about the quality of today’s tag team wrestling. Brisco, himself a legendary tag team champion, told me the current crop of stars are actually phenomenal in the ring; if they lack anything, it is “time” to tell a story. I agree to a point…they lack time…as a TEAM!

On this point tag team wrestling definitely WAS better in the 1980’s. The WWE world tag team titles were important. Crowds were into tag team matches that far surpasses today’s level of interest. Don’t believe me? Go watch WrestleMania I and WrestleMania 2. The crowd in MSG was furious in 1985 when the Iron Sheik and Nikolai Volkoff stole the titles from Barry Windham and Mike Rotunda. Better yet, watch the euphoria the next year when the British Bulldogs won a thriller over the Dream Team. The Bulldogs were champions! It was 1986, and it was damn important!

My favorites, the Hart Foundation, used the help of referee Danny Davis to finally wrestle the championship from Davey Boy Smith and the Dynamite Kid the following January (Wow…the Bulldogs held the titles for almost 8 months…how boring by today’s standards).   I went crazy! I remember where I was when the Hart Foundation won those titles, and, sure, I thought it was a little “fishy” that Davis didn’t disqualify the Harts for using Jimmy’s megaphone, but what did I care? The Hit Man and the Anvil finally had the belts! (By the way, if you would have told me the Bulldogs and the Harts knew each other I would have instantly blown up. 13 year old David was not ready to peak behind the curtain just yet.)

I was so nervous that day in October when the Harts defended the titles against Strike Force (themselves a relatively new team). I sank to the ground when Jim Neidhart got caught in Martel’s Boston Crab, costing them the titles (I still contend he never submitted…but whatever…). For almost 9 months the Hart Foundation defended the titles against the hottest teams, and even made “pink” look cool. It was my favorite time ever watching pro wrestling. Seeing the Hart Foundation lose those tag team titles was heart-breaking, no pun intended.

Honestly that match still bothers me. Hell, I’m still upset the Iron Sheik and Nikolai Volkoff got screwed in their match against the British Bulldogs on the May 1986 edition of ‘Saturday’s Night’s Main Event’. Nobody announced it was being fought under “European Rules” until the Sheik and Volkoff won the 1st fall! Maybe I’m overreacting, but the point is I cared about those teams, those matches, and those coveted belts.

Look at the roster of tag teams that competed for the WWF in the late 1980’s: The Hart Foundation, King Kong Bundy and Big John Studd, The British Bulldogs, Demolition, The Killer Bees, The Islanders, The Fabulous Rougeaus Brothers, The Powers of Pain, The Dream Team, The Iron Sheik and Nikolai Volkoff, The Funk Brothers, The Bushwhackers, The Twin Towers, and on and on. Even Paul Roma and Jim Powers found some success when they were repackaged as the Young Stallions. Think about that, working alongside those other brilliant teams elevated 2 career jobbers to credible tag team matches.

In fairness, it wasn’t all good. I didn’t love when Hawk and Animal joined the WWF and immediately the Legion of Doom got repackaged as “cartoon” versions of themselves. I know the LOD had success during their initial run with WWF but they seemed so sanitized…like the face paint was a little “too” perfect…and the ring gear was a little “too” marketable. I guess this was a sign of the times as WWF was so focused on merchandizing and creating superhero characters (even more so than usual) some of the grittiness of the sport was lost. Think about Ricky Steamboat wearing that ridiculous dragon outfit.

The key difference between “then and now” is that these were key storylines in WWE. Not mid-card filler the way the tag team division is utilized now. And please don’t point to convoluted 6-man or 8-man random main events as proof that WWE values tag team wrestling. Seth Rollins, Luke Harper, and Kane vs. Dean Ambrose, Erick Rowan, and Ryback is not important tag team wrestling. It is simply time-filler for a bloated television product.

It’s just disappointing because tag team storytelling can be so exciting. Not just in the ring (4 guys working instead of just 2) but the drama outside the ring as well (tension between team members, etc.) Since WWE produces so many hours of weekly content and monthly pay-per-views we rarely have to see wait to see certain match-ups. There just isn’t that “build” anymore which is a shame because that theater still works. Think about Daniel Bryan’s victory at WrestleMania XXX, it was made all the sweeter because that moment was teased for so long. But unfortunately that is the exception not the rule.

The contrast between the two eras of tag team wrestling is so vivid to me because I’ve experienced them both “live” and in person. One of the most exciting moments I’ve ever witnessed was at WrestleMania IV when Demolition came through the curtain. There was an audible ‘gasp’ in the crowd. The look, the leather, the menace, the killer song, the helmets, Mr. Fuji…to that point never has a WWF tag team looked more bad ass, and this was the night Ax and Smash were finally going to get their hands on those pretty boys, Strike Force.

Ax and Smash paused at the top of the ramp, and then started walking to the ring lead by the devious Mr. Fuji. The Atlantic City Convention Center was electric.

Then Strike Force came running to the ring and it was on. The match wasn’t the greatest tag match ever put together, but when Ax used Mr. Fuji’s cane to steal the titles the crowd was delirious with excitement. It was one of those rare moments in the 1980’s when the ‘heels’ were way over…much more so than Rick Martel and “Chico” Santana (Jesse Ventura never was politically correct, was he?)

Demolition was cool. Seeing them win the WWF world tag team championship was cool. They defended those belts for the next 478 days! 478 days! That is tag team history.

Think how this would play out today….

Leading up to WrestleMania, we would see Tito Santana vs. Ax on Monday Night RAW, ending in a disqualification (or God forbid a roll-up). The next week Rick Martel would square off with Smash, which again would end in a disqualification. Then Strike Force would lose a non-title match to Ax and Smash on SmackDown. The same match would be booked for the following RAW, again a non-title victory for Demolition. Tito Santana beats Smash on WWE Main Event. A week before WrestleMania, Demolition would win the tag team titles on RAW, causing dissention in Strike Force. All of this would lead to Tito Santana vs. Rick Martel at WrestleMania. The whole thing would last 3-4 weeks.

And nobody would care.

Remember Big Boss Man vs. Akeem? Yeah, neither do I. But I remember the Twin Towers. And I remember that night in Atlantic City in March 1988. It marked the beginning of Demolition’s reign of terror in WWF. And sadly, although I didn’t know it at the time, it also started to mark the end of the golden age of tag team wrestling. It was a slow, gradual decline…but more and more we saw confusing heel turns, random partnerships, meaningless title changes, and lost storylines which eventually led to this recent Monday Night RAW in Orlando, FL. The one that saw the Rhodes family fall apart at the seams. A storyline everybody saw coming from a mile away.

Where’s the fun in that?

PS – Congratulations to the newest WWE Hall of Famers – the Bushwhackers! Luke and Butch left a “dent” in this business…although I was REALLY confused when I saw them eating with their wives in Trump Plaza after WrestleMania V. They were using….utensils?!? They were wearing…sweaters? Where was the bucket of fish and loud stomping/chewing?!

PPS – I hope you like my WWF tag team artwork. My wife sat down a few years ago to do some scrapbooking (remember when that was popular?), it looked interesting so I got my creative juices flowing…and next thing you know I’m struttin’ and cuttin’ more than Brutus “The Barber” Beefcake. I think it came out pretty well…and of course the Hart Foundation is wearing the championship belts.

Related ItemsFeaturedhart foundationhulk hoganmega-Powerswwe
← Previous Story Ask the Mask
Next Story → What if WCW had won the Monday Night War?