Home / Columns / ‘This is My Wrestlemania Experience?’ by Stephen Harland

‘This is My Wrestlemania Experience?’ by Stephen Harland

Wrestlemania is the highlight of the year for me. Last year I got to sit front row at Wrestlemania 28 so I knew this year was going to be different, I had a ticket to sit in the 100 level so I knew I wouldn’t be as close but I was still looking forward to the show and determined that I wouldn’t compare it to last year and would just enjoy the fact that I was attending my 5th consecutive Wrestlemania.

I arrived at the arena looking forward to the show and went to my section and looked down towards the arena, I was happy, the view was a lot better than I was expecting.

Until I actually went to my seat. 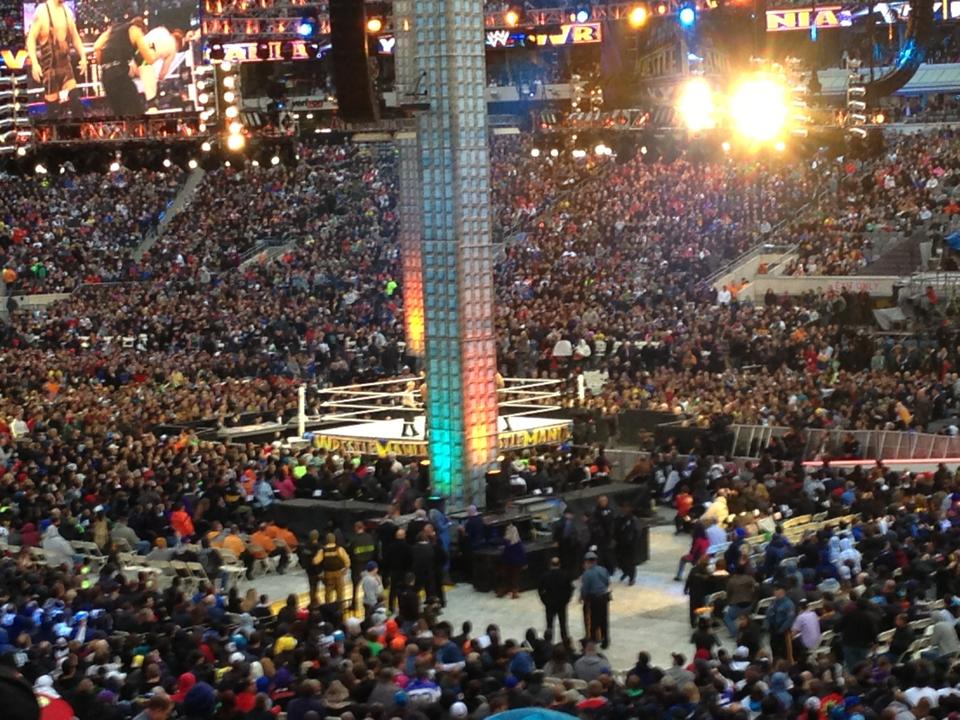 As most people will be aware there was a structure of the ring in case there happened to be rain at the event. It was also successfully blocking my view of the ring! I thought I would wait until the dark match and see how much I could actually see before deciding what to do. As Miz and Wade Barrett made their entrances I realised that my seat was also slightly behind the entrance way so I wouldn’t see anyone make their entrance until they were half way down the ramp.

I wasn’t happy so I went to the nearest staff member who told me I needed to go to guest services to complain, I went there and was greeted by a line of about 20 people who were having the same issue as me. When I got to speak to somebody, we had this conversation after I explained what my problem was:

Staff: “Sir you need to go back to your seat, if it doesn’t get any better then please come back and see us”

Me: “Do you know are they planning on moving the ring later?”

Me: “Are they planning on moving the structure later?”

Me: “So how exactly is my view likely to get any better?”

Staff member stares at me blankly.

2nd staff member: “Well hopefully you’ll still be able to watch it on the screen”

Me: “I did not come all the way from Belfast to New Jersey to watch this on a screen. It would have been so much cheaper, and warmer, to just watch it at home!

I returned to my seat feeling a little dejected but still determined to enjoy my evening.

I had many conversations with fellow fans who were equally disappointed with how little of the action they could actually see. A gentleman who was with his wife and young son informed us all that he was annoyed but all he wanted them to do was say sorry and give them something like a keyring as a token of apology.

This blew my mind. A keyring? A keyring? I started adding up all the money I had spent on this trip and decided that I would probably have a stroke if I was given a keyring by way of an apology.

I returned to guest services even angrier and was greeted by about 30 fans this time who were all having similar negative experiences of the show so far.

As the minutes ticked by we were aware that we were missing more and more of the biggest show of the year. As twisted as it may sound, this was actually a lot of fun! We couldn’t see any monitors, we could only hear the entrance music and the ring announcers so as the show went by we talked about our surprise at Ryback losing to Mark Henry, our lack of surprise at Fandango beating Jericho and our belief that Ziggler would be cashing in later as Team Hell No had retained their championships.

As P Diddy was starting his set, an excited guy arrived on the scene declaring “it’s ok, it’s fine” before walking straight into the guest services office and not actually speaking to any of us.

The other advisors started making their way out and calling our names and giving us new seats, I was originally in section 109 but was being moved to 137. I arrived just as ‘coming home’ was starting.

The new seats were pretty good and I really enjoyed the rest of the show. I was surprised we didn’t get a Ziggler cash in but thought the rest of the show was enjoyable. I could tell the show wasn’t going to get a completely positive response from people watching at home but I don’t see the point in spending a small fortune on going to Wrestlemania and nit picking things. I enjoyed the show but was annoyed that I had missed pretty much the first half due to WWE not having the brains to realise that humans cannot see through large objects.

I held off writing this piece as I made a complaint to WWE about the seating issue the night of Wrestlemania and wanted to close this by saying that they had provided me with an apology and compensation for my troubles.