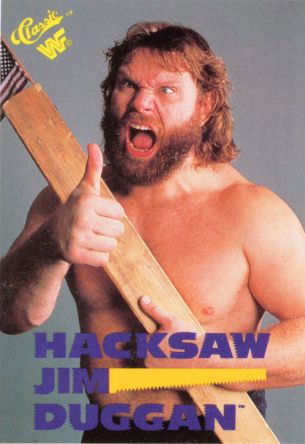 If you were waiting for the voluminous, printed history of the world’s largest wrestling federation to ever be honestly and accurately told, you’ll probably wait forever.  Well, in an effort to serve that craving for wrestling historians, Kayfabe Commentaries’ DVD series “Timeline: The History of WWE” was brought to market a year ago.  And today, the 1988 chapter is released with Hacksaw Duggan drawing the curtain back and showing the guts of the company — good, bad, and ugly.

The “Timeline” series has each feature-length DVD focus on one year in the company, told from the perspective of a major player on the card during that year.  1988, as Duggan details, featured the Ted Turner purchase of WCW, the death of Adrian Adonis, Wrestlemania in Atlantic City, a career ending injury to Harley Race, continued fallout over Duggan’s drug arrest with The Iron Sheik, and more events.  Kayfabe Commentaries’ co-owner Sean Oliver says the first-person account is what makes the series extra special.

“The amount of research we put into every edition of this show is breathtaking,” Oliver began.  “And that, when coupled with the first-hand account of the star, is what paints the entire picture.  Sure, we can have wrestling historians try and paint the entire picture with details.  But without that color added by someone who was actually there for these events, it would come across as rather dry.  Your Timeline shelf will eventually house all the years, told by all the major players, of the WWE.  The collection is becoming priceless.”