Home / Behind the Scenes / Tina Ferrari Talks About GLOW on Netflix 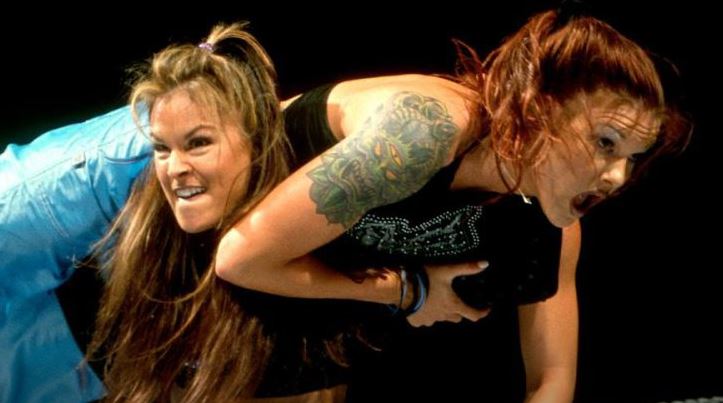 Ask Lisa Moretti if she remembers the rap lyrics from 30 years ago on “GLOW: The Gorgeous Ladies of Wrestling” and she easily slips right back into being Tina Ferrari.

When I wrestle, you’ll want to cheer

‘Cause I’m a winner and I make that clear

All my opponents know I’m a stud.

What can I say? It’s the Italian blood.

So tell me I’m what you desire,

‘Cause that’s what revs my engine higher.

All you good lookers cheer me on,

And I’ll treat you to Dom Perignon.

Ferarri was a former GLOW champion – signified by a crown and not a championship belt – and so she was eager to watch the Netflix series “GLOW” that chronicles the reinvention of a group of actresses and others into wrestlers. The show has all the hallmarks of the 1980s  — the music, big hair, over-the-top makeup and Las Vegas-style costumes.

Moretti says she binge-watched the 10 episodes in two sittings. Her review?

“I thought it was a perfect thing to make a show from,” she told For the Win. “As far as telling our story and whether it was true to life, I thought they made a good mix. … I’m glad it’s not a documentary because it’s probably going to be way more entertaining with the really good writers and producers who put it together.”

More than a decade after GLOW, Moretti got back into the wrestling business and would later go on to success as Ivory and was a three-time WWF/WWE women’s champion.

GLOW, though, has endured. A highly-regarded documentary in 2012 featured a reunion of many of the original cast. There also has been a series of GLOW cruises for fans to meet the performers.

Moretti, 55, says she can’t pinpoint why GLOW has been so long-lasting, but she has a few ideas:

“I understand it now because I worked with the best of the best, but I didn’t get at first that people have an extreme passion for wrestling and the wrestlers. The fans are really intimately connected with each wrestler,” Moretii said. “I also think that anything that has a collection of women, there will be a sisterhood that people will relate to whether they are guys or girls. There is a power to sisterhood.

“I also have come to learn that we had a large gay population that appreciates GLOW. In the mid-1980s, there wasn’t a representation of gayness on televison. Our glitter and our goofiness and our great costumes made in Vegas; the cheekiness and campiness of the show, it turns out little boys who were gay coveted our act. I went on one of the GLOW cruises last February and all the fans were gay guys. We had so much fun together. That was a new education to me.