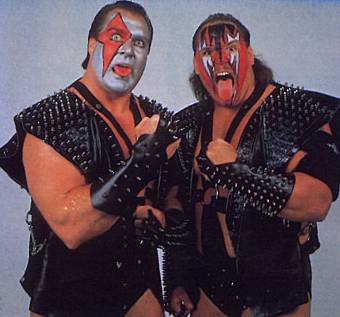 www.uxwwrestling.net
DEMOLITION
One of the most dominant tag teams of all time has been signed for
UXW’s “To Hell and Back”.

Ax and Smash, better known as Demolition, haven’t been a team since 1993 and now, for the first time ever, are making their momentous comeback wrestling as a team at UXW’s September 29th event.

Ax and Smash are one of the best tag teams of all time, hands down. They ran rough shod over most teams that came their way in the WWF. The painted face duo became WWF tag team champions for the first time by defeating Strike Force (Tito Santana and Rick Martel) at Wrestlemania IV. They held the titles for an unprecedented 478 days before they lost them the straps to the Brainbusters (Arn
Anderson and Tully Blanchard). They eventually won the titles back only to lose them to the Colossal Connection (Andre the Giant and Haku).

The above paragraph alone should make you realize that Demolition was one of the best and went up against the best. They didn’t stop here though. They feuded with the Rockers, the Legion of Doom, the Hart Foundation, The Islanders, The Powers of Pain, the British Bulldogs and any other tag team that thought they could take Demolition down. Ax and Smash went against the best and proved they were the best.

Now is your chance to see one of your favorite tag teams of all time (don’t try and deny it.) Come out to “To Hell and Back” on September 29th to see if Ax and Smash are here for gold or just to remind everybody that they still are one of the best teams ever.

FOR THE UXW WORLD TITLE
SABU VS STEVE CORINO
On 9/29 2 Former ECW & UXW World Champions collide as UXW World Champion SABU faces former UXW World Champion Steve Corino is what could be Corino’s last UXW match ever since he is retiring in December………….and since we want this to be the best possible match we have decided that this match will be a TLC match with NO DQ.

TOO COLD SCORPIO VS TRENT ACID
UXW on 9/29 former WWE and ECW superstar 2 Cold Scorpio will go one on one with one of the greatest indy wrestlers in the past 10 years Â½ of â€œthe Backseat Boysâ€ Trent Acid who has held every single UXW title including the UXW World Championship.

To Order Tickets go to www.paypal.com and make payments out to
[email protected] or visit the UXW web store at www.uxwwrestling.net/store

Contact info and other ticket centers:
For Show Information Call The Central Florida Fairgrounds at 407-295-3247.

BUY 2 GET 1 FREE DVD AT UXW’S NEW WEB STORE!!!
UXWWrestling.net has added a brand new web store with a variety of UXW
DVD titles, tickets, more titles to be added on a regular basis and
PayPal as our payment method.

To celebrate we’re running a Buy 2 DVDs Get 1 Free Special! Very
simple, if you buy 2 DVDs (of any title) you can choose a 3rd one of
your choose FOR FREE! Just tell us what DVD you want in the comments
section on checkout.

Some of the matches you can now own include:
– Sandman vs Raven with special guest referee Mick Foley
– Eddy Guerrero vs Crowbar
– Homicide vs Low Ki
– Scott Steiner vs Rhino
– Shane Douglas vs The Sandman
– Bam Bam Bigelow and Chris Candido vs Simon Diamond and Matt Striker
– Low Ki vs Sonjay Dutt
– Raven vs Rhino
– Sabu vs Rhino
AND MORE!!!