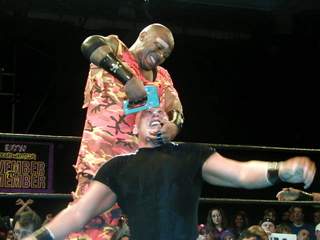 Now I know everyone who has watched wrestling has heard the word HARDCORE thrown around – like the old WWF Hardcore title. But in my humble opinion, I think that title had nothing to do with hardcore. Now promotions such as CZW, XPW, FMW, and even ECW are hardcore. Men like Sabu, Mr. Pogo, Masato Tanaka, Terry Funk, Super Leather, New Jack, Hayabusa and Mick Foley are hardcore. I respect all these men so much for what they do. Let’s go through the top five hardcore men ever in wrestling.

5. New Jack- Now this is a odd pick to many people but think about one thing……..The man is insane. ECW new this when they used him. They would schedule whole match just for him to come in and destroy everyone in the ring. I bring up Anarchy Rulz 1999, A tag match breaks down when Roadkill and Danny Doring come down to the ring. Then I believe five other men come to the ring to brawl. All this is basically for New Jack to come down with a trash can full of weapons to destroy them all. He puts four staples in Spanish Angel’s head and then places a no parking sign on his crotch, and hits it with a pool stick. He is one of the men who put ECW on the map..

4. Hayabusa- For anyone who has not had the honor to see him wrestle, simply put, you need to. He is the sickest aerial artist I have ever seen. 99.9% of the moves you see on Monday or Thursday nights were originally Hayabusa`s. He invented the shooting star press and so many other moves stolen by the American promotions. Now Hayabusa is not a wrestler that uses weapons like most you would assume to be hardcore, but the fact that day in and day out he would put his body on the line with so many high risk moves is one reason he is on this list. Sadly Hayabusa broke his neck trying a second rope moonsault(lionsault). He is now confined to a wheel chair but I still feel he is one of the greats to enter the ring.

3. Terry Funk- Come on, The man is pushing fifty and still kicking ass all over the country. He is one of the true pioneers of hardcore. At Clash of the Champions 9 he went at it in an I quit match with Ric Flair so good it made the Ultimate Ric Flair Collection. That means a lot seeing as there are like ten matched on that whole DVD. Funk proved his Hardcore status in his many tours of Japan and the United States. Now here number 3 and number 2 have a toss up effect in my mind but…….

2. Mick Foley- What can I say about the man that hasn`t already been said. He is one of the sickest men ever in the sport. His battles with number 3, Terry Funk, are so many and so painful to watch. The blood this man has shed over three continents is in numerous amounts. Also he lost an ear in Germany and just kept going. That’s hardcore, but another aspect is the man slept in his car to learn the sport. That’s crazy to think he had that much passion for a sport he had yet to start. 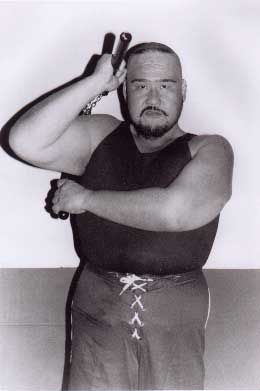 And last but definatly not least…….

1. Mr. Pogo- Now to most American fans he is an unknown, but to true fans like myself he is the sickest mothers around. The man loves to use barbed wire, nails, knives, hammers, chains, sicles, huge blades, chairs, power drills, fire, and the list goes on. I have seen him destroy men in death matches. Leaving them in a bloody pulp and thinking none of it. This man will destroy you with everything in his reach. And did I mention he is pushing 50″” He is insane and has nearly killed men in the ring and I can`t help but watch everytime he does it.

That is in my humble opinion the five sickest men in wrestling. If you feel differently, then hey I understand, it’s just my opinion. Thanks for reading……

Related Items
← Previous Story Mercedes vs. Serena headlines WSU iPPV
Next Story → AS I SEE IT: The Road Warriors book