Home / Miscellaneous / Why Walk on Eggshells About Chris Benoit?

Why Walk on Eggshells About Chris Benoit? 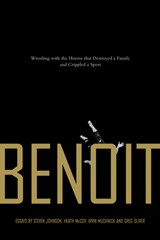 BENOIT: Wrestling with the Horror That Destroyed a Family and Crippled a Sport is, unsurprisingly, a hot-selling book immediately upon release. Among wrestling titles in the U.S., only Chris Jericho‘s well-written memoir and the latest WWE spinoff product, with Batista’s name on the cover, are doing better out of the gate. At Amazon Canada -Â where BENOIT has hovered inside or near the list of 100 bestsellers among all booksÂ – only Jericho’s and the long-anticipated blockbuster by Bret Hart are moving more briskly.

Your humble blogger, one of four BENOIT co-authors, thanks Steven Johnson, Heath McCoy, and Greg Oliver for carrying me better than Adrian Adonis covered for Jesse “The Body” Ventura in tag-team matches.

However, I observe that almost everyoneÂ – including Steve, Heath, Greg, and our publisher, ECW PressÂ – tiptoes around the subject of our book rather more gingerly than necessary. Inevitably, the first posthumous book on Chris Benoit (as well as, in my biased prediction, what will ultimately go down as one of the best) has taken heat on the grounds of “taste.” But inevitability and legitimacy are not the same thing.
CONTINUED AT http://muchnick.net/babylon/2007/10/21/why-walk-on-eggshells-about-chris-benoit/

Related Items
← Previous Story Bret Hart Book Signing in Saskatoon on 11/7
Next Story → AS I SEE IT Bob Magee — PWBTS.com