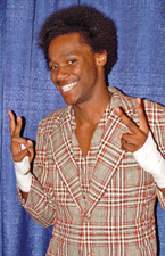 1. What made you decide to get involved in professional wrestling?

One of the things that made me want to get involved in wrestling was that I’ve always enjoy watching wrestling since the age of 5, and it hasnt stopped since then.

2. What have been some of the highlights of your career, thus far?

Some of my career highlights are becoming the only black guy in the movie Nacho Libre, Wrestling on MTV for Wrestling Society X, and Becoming the PWG Champion!

3. You are a participant in this years’ ECWA Super 8 Tournament. What was your reaction when you were asked to participate in such a prestigious
tournament?

I feel really honored that asked me to participate in the Super 8. A lot of top dawgs have been in the tourny and I hope to show the fans what I can do.

4. Any thoughts on how you’ll prepare physically for three possible matches in the Super 8?

Physically, I feel good to go. I may not be BIG or BUFF, but I can still put it down!

5. Prior to being invited to participate this year, had you heard of the Super 8? If so, what were your thoughts regarding the tournament?

Yes, I’ve heard of the Super 8. Davey Richards was in the tournament before and he was telling me about it while in PWG. So I am really pumped!!!