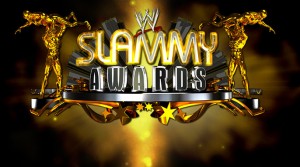 David Dexter reports that the WWE revealed the total votes for the Slammy Awards, which you can see below. The company said that the total Slammy votes cast totalled over 583,000:

For those who may have missed it yesterday, WWE sent out the following presser regarding their new app …

For the first time ever, the 2012 Slammy Award winners (which were announced LIVE at 8/7 CT on USA Network this past Monday) were determined by fans, exclusively inside the WWE App.

It was a record-setting night for the second-screen, as WWE had the second biggest single day of downloads since launch with more than 151,000 downloads and more than 583,000 Slammy votes.

The app also saw more than 24,000 app updates — the largest single day of updates ever and the event pushed the WWE flagship app over the 3 million app download mark in215 countries, since it launched just four months ago.

The Top 5 total votes for all Slammys nominees were: