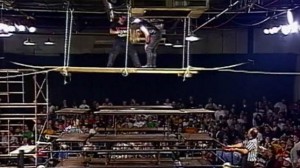 When Mick Foley was infamously thrown off of the top of Hell in a Cell at King of the Ring 1998 by The Undertaker, it wasn’t a stipulation of the match — it was a risk. It takes a special kind of crazy or a very bitter grudge to engage in a contest with the potential to be thrown off a scaffold. WWE Classics examines five of the most memorable — and wildest — Scaffold Matches in sports-entertainment history.