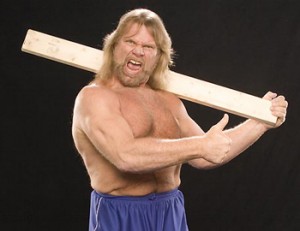 Courtesy of Lords of Pain.net:

Promoting his appearance this past Saturday at Marvin Vinson Center in Clarksville, Arkansas, for Traditional Championship Wrestling’s “Holiday Homecoming 2″ event, WWE Hall of Famer “Hacksaw” Jim Duggan say he’s happy to work for a promotion that caters to families.

“The name sums it up,” said Duggan. “Traditional Championship Wrestling. There are no obscene gestures. It’s the wrestling people grew up with. You cheer the good guys and you boo the bad guys. You come to a TCW event and you’ll have more fun than you’ll have at a movie. It reminds me of the old Mid-South [Wrestling].”

The legendary grappler prefers this type of product to that of the WWE’s raunchy “Attitude Era,” which routinely showcased disrespectful, beer-swilling anti-heroes who defied authority.

“I think the pendulum swung way off during the WWE era,” says Duggan. “I think wrestling should be family entertainment. We don’t need those obscene gestures. It’s for kids. I’ll be screaming ‘hooooo’ and ‘U-S-A’. I don’t think you need someone out there drinking beer and giving someone the bird.”