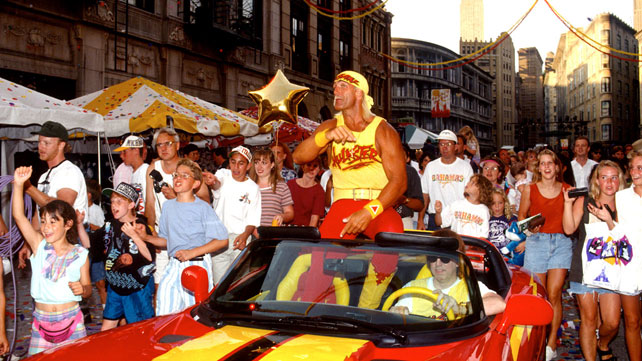 Hulk Hogan and WWE were synonymous for a more than a decade. In 1984, the muscular marvel catapulted WWE from a territory in the northeastern United States to a global phenomenon. The Hulkster reigned as WWE Champion for most of the ’80s, standing tall next to Mr. T following their victory at the inaugural WrestleMania, bodyslamming Andre the Giant in front of 93,173, hosting “Saturday Night Live,” and gracing the cover of Sports Illustrated.

Yet, as the 1990s began, Hulkamania started to wear thin on the WWE Universe. After a decade’s worth of prayers with a belly full of vitamins, fans began to grow tired of Hogan’s spiel. By summer 1993, The Hulkster had left WWE not with a bang, but with a whimper, after he was crushed by Yokozuna at King of the Ring.

Hulk Hogan would not be seen in a wrestling ring for another year, when he unseated Ric Flair to capture the WCW World Championship. Hogan’s switch to WCW was shocking to wrestling fans worldwide, but the story behind it – one that involves Ted Turner, Walt Disney World and a speedboat with stealth capabilities – is even more interesting.

Nineteen years removed from Hulk Hogan’s arrival in WCW, WWEClassics.com spoke with Ric Flair, “The Mouth of the South” Jimmy Hart, Kevin Sullivan and others to get the inside story on the biggest signing in sports-entertainment history.