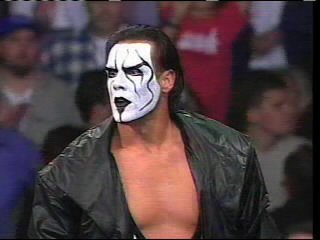 TNA Hall of Famer Sting appeared on Kentucky Sports Radio on WKJK-AM 1080 over the weekend. Here are some highlights:

– It was mentioned that Sting’s Son, Steven Borden, is a LB for the University of Kentucky.

– They hyped the TNA Impact taping in Louisville for July 18 and the TNA Base Brawl event in Lexington this Saturday before the interview. Sting said fans would see some of the best in a different setting.

– Sting said he’s not really focused on capturing the TNA World title at this time.

– When asked who his dream opponents would be, Sting mentioned the Undertaker and Shawn Michaels.

– He named his 3 favorite matches of all time:  Clash of Champions I vs Ric Flair, Great American Bash 1990 vs Ric Flair, Starrcade 1997 vs Hulk Hogan.

– Sting says he’s never seen the movie “The Wrester” in its entirety. He’s seen parts of it, which he said showed the seedy side of the industry. However, he did say the industry has cleaned up a lot and says Mickey Rourke did a great job.