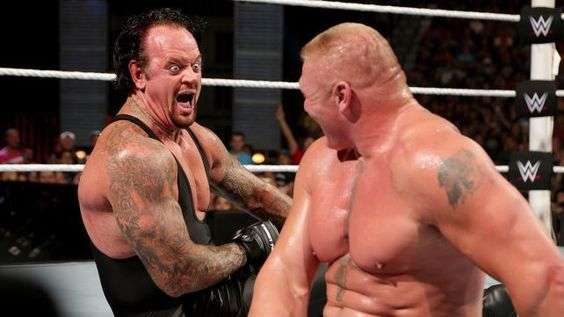 The unpredictable nature of pro wrestling has led to some really humorous stories over the years and across promotions.

Pro wrestling locker rooms might be a collection of men and women, mostly men, in a highly competitive environment, but theyre still locker rooms. And when locker rooms, as well as hotel rooms and cars, contain people who are very familiar with each other, things can get a little wild.

That unpredictable nature has led to some really humorous stories over the years and across promotions, and they involve some of the most intense performers in the business. Here are the 10 funniest such stories that have surfaced.

#10 – The Undertaker and the cucumbers

While Paul Bearer served as Undertaker’s manager, the duo traveled together from town to town for WWE shows. As a result, the two often made jokes at each other’s expense.

When Taker laughed at a particularly embarassing situation involved Paul Bearer wetting his pants at a gas station, the manager decided to get even. It turns out, Undertaker has a real fear of cucumbers, and Paul Bearer filled the hat of his ring gear with the green veggie, causing the legend to vomit all over his hat and the cucumbers.

Jerry “The King” Lawler is a legend in the wrestling business, but he also developed quite a reputation for thinking he was better than his colleagues in the locker room. And guys like that are generally dealt with by their peers.

In this case, that meant ill treatment of Lawler’s signature crown and perhaps in the worst way possible without completely destroying it. Reportedly, multiple superstars took turns defecating in the crown, including Kliq members among others. Actually, destroying the crown completely might have been better for the King!

Naturally, some funny things can happen when friends or co-workers are out on the road together, and wrestlers are no different. One such occurrence came as Roddy Piper and Kevin Sullivan were riding in a carpool in Florida.

Piper had decided he wanted to shoot one of the alligators in a nearby canal and have it turned into a belt and shoes. After choosing his target, the vehicle was stopped and Piper and Sullivan began shooting the gator. Thinking it was dead and floating in the canal, they stripped down to their wrestling gear and went in after their kill.

Unfortunately, it wasn’t dead and dove underwater, causing the two men to high-tail it out of the canal and back to the car.