Home / Columns / 10 Masked Wrestlers Whose Identity Was No Secret

10 Masked Wrestlers Whose Identity Was No Secret 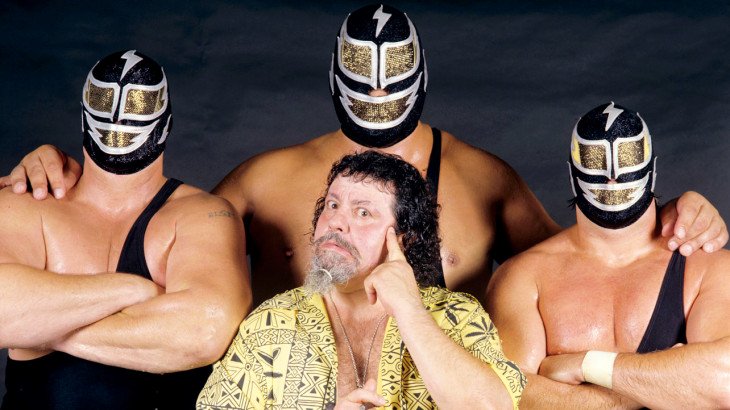 Sometimes, wrestlers do things that result in them being forbidden from being a part of whatever wrestling organization they are employed by. Sometimes they get suspended, sometimes they get injured, sometimes they just get beaten so badly that they need to go away for a while. But the lure of the ring is powerful, and few can resist it for long. So, how is a wrestler supposed to continue doing what they love without violating the established rules? Why, put on a mask and claim to be someone else, of course! Over the history of professional wrestling, many top stars have used masks to (poorly) conceal their identity in order to get around suspensions and the like, and here are some of the most memorable occurrences.

You might think that it would be impossible to disguise someone as recognizable as Andre The Giant, and you would be absolutely correct. But that was kind of the point, after all. As the story goes, Andre was suspended by WWE for missing matches against The Heenan Family. Shortly after Andre disappeared, a new masked tag team debuted, calling themselves The Machines. The wrestler known as Super Machine would go on to fame in WWE as Ax, one half of Demolition, and Big Machine was played by legendary tag wrestler Blackjack Mulligan, but it was unclear who the third member, Giant Machine, a gigantic wrestler who looked strangely familiar, really was. The entire team drove The Heenan Family crazy, as they were unable to prove that Giant Machine was actually the suspended Andre, and things would only get worse for them as the team would also feature appearances by masked men under the names of Animal, Hulk, Piper, and Crusher Machine (who were all exactly who you think they were). Eventually, Andre’s suspension ended (in what was eventually revealed as a plan by Bobby Heenan that led to Andre turning on Hulk Hogan), and The Machines disappeared for good.

Actually, the real story about The Black Scorpion was that nobody knew who he was, not even the people booking the shows at the time! The people in charge had come up with a great idea of a mysterious masked man who would claim to be someone from Sting’s past, and feud with WCW’s most popular wrestler. But while the story was great, the execution was lacking, as the Scorpion did lame magic tricks instead of actually fighting Sting. Oh, and also, nobody had actually decided who the Scorpion was actually going to be in the end, as they were sending out a placeholder in a mask to perform, while someone else spoke his (electronically altered) lines backstage. However, when the match between Sting and The Black Scorpion finally took place at Starrcade 1990, it was clear roughly five seconds after the match began who WCW had finally settled on. Of course, it could only be Sting’s greatest nemesis, Ric Flair, and indeed, after Sting defeated the Scorpion, he unmasked his opponent to reveal The Nature Boy himself.

Way back in the 80’s, the Junkyard Dog was legitimately one of the most popular wrestlers in North America. One of his best-remembered feuds was with the future Million Dollar Man, Ted Dibiase, in Mid-South Wrestling, where JYD would lose a “Loser Leaves Town” match, where the stipulation was that the loser was suspended from that territory for 90 days (hey, at least back then they didn’t pretend that a wrestler wouldn’t eventually make a big comeback). While he was serving his time, Mid-South promoter Bill Watts came to him requesting help against DiBiase and his stable. JYD would not violate the terms of his suspension, but he did suggest someone else who could help: the massive Stagger Lee, who looked very much like Junkyard Dog, but wore an identity-concealing mask. DiBiase’s cronies tried relentlessly to expose Stagger Lee as JYD, but ultimately failed, and the Dog returned to great ovation after 90 days had passed, while Stagger Lee mysteriously disappeared.

After The Miz was fired in an overly complicated plot by Raw Guest Host Jeremy Piven to screw over John Cena (which failed, obviously), he wasn’t out of a job long. At a Raw in Calgary (where WWE, for reasons that are still beyond comprehension, spent most of the show mocking Canada), a masked wrestler named “The Calgary Kid” came out and wrestled Eugene, who hadn’t been on television in a long while, for a contract with the Raw brand. Pretty much anyone with two functioning brain cells could see what was going on, and indeed, The Kid won the match and the contract, then immediately unmasked to reveal The Miz. And yet WWE continues to wonder why Canadian wrestling fans are so bitter towards them all the time.