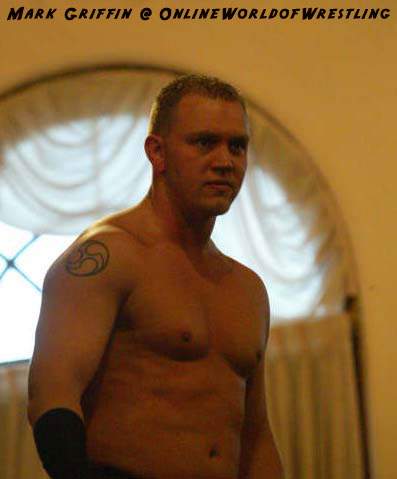 First up, Brian Fury. Brian was trained by Steve Bradley and has been wrestling for 7 years up and down the east coast of the US…

1. What made you decide to get involved in professional wrestling?

Growing up I was always a fan. My mom used to yell at me because all I ever did was wrestle. It didn’t matter where either, home, the park, or school. It got me in a lot of trouble when I was a kid! As I got older the attraction never faded, it only got stronger. I realized that I had to at least try it and give it my all or I wouldn’t feel complete.

2. What has been the highlight of your wrestling career thus far?

Obviously being asked to do the Super 8 this year has been THE highlight of my career.A few other moments do stand out for me though. I was asked to go to Smackdown for tapings and before the show I got to train in the ring with a few of the guys there. It was a bit surreal to be wrestling in the WWE ring in the Banknorth Garden in Boston (even if the arena was empty). On Oct 5th I did a pre-show match for ROH. Just getting the opportunity, and getting ‘looked at’ by ROH was awesome. They have a really great company and hopefully someday I can become a part of their regular roster.

3. You are a participant in this years’ ECWA Super 8 Tournament. What was your reaction when earning that spot in such a prestigious tournament?

I was in shock for a bit, but overly excited. It is such a great honor, and the tournament has such a history and legacy how could you not be excited, or shocked for that matter? I believe in my abilites in the ring, but I never expected an honor quite like that.

4. Any thoughts on how you’ll prepare physically for three possible matches in the Super 8?

From the moment I was asked to participate I have really amped up my cardio in the gym. Also, I been training at different wrestling facilites up here in the Northeast trying to get in the best possible ‘ring shape’ I can be in. I changed my eating habits up quite a bit too because, truth be told, I was gaining a bit too much weight! However, everything is in check right now and I should be in peak condition by November 10th.

5. Have you had the opportunity to wrestle any of the other Super 8 participants in the past? If so, whom?

As far as this years tournament goes only Matt Logan. We train together at the Chaotic Training Center in Massachussets. I did a camp or two with Rob Eckos, but never wrestled him.

Competitors from past tournaments? Steve Bradley the winner of the 1999 tournament was my trainer for over 4 years when he was released from WWE. Other past competitors I have wrestled include: Chad Collyer, John Walters, Bryan Logan, and Andre Lyons.