By OWW Contributor on January 5, 2016@owwcom 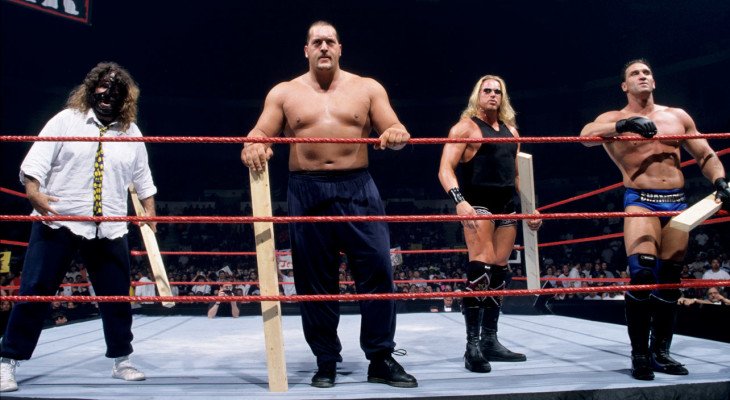 Sometimes, in order to get things done, you have to get a bunch of people together to help you accomplish through numbers what you just couldn’t do on your own. Some of the biggest stars in professional wrestling got their starts as humble cogs in a larger machine, and some established stars used a stable of like-minded individuals to make themselves even bigger. When things go according to plan, you get some of the most famous factions to ever prowl the squared circle: D-Generation X, the New World Order, and the legendary 4 Horsemen come to mind. But when things go awry, suddenly you’re just a group of people with no purpose and you end up a footnote in wrestling history. Sort of like these groups here, which all appeared, had brief flashes of stardom (or maybe not), and disappeared almost as fast as they had formed.

It may surprise you to know that Vince McMahon’s Corporation stable, that he created to deal with the rising problem of “Stone Cold” Steve Austin, was not the first group of heels brought together through greed, bad attitude and pursuit of the almighty dollar. In the WWE New Generation era of the mid-90’s, “The Million Dollar Man” Ted DiBiase, who had basically retired as a wrestler at this point, assembled a group of ill-bred and ill-tempered Superstars in an attempt to run roughshod over the good guys of WWE, much the way managers like Bobby Heenan had formed gigantic stables in the 80’s to fight against Hulk Hogan and his fellow babyfaces. Unfortunately for DiBiase, his Corporation wasn’t exactly formed of the best and brightest that WWE had to offer. Among his employees was the ancient and also mostly retired evil Russian Nikolai Volkoff, DiBiase’s former tag partner and accountant Irwin R. Schyster, evil Native American Tatanka, and Bam Bam Bigelow, who was actually a fairly talented big man whose career highlight would be facing NFL legend Lawrence Taylor in the main event of WrestleMania XI, a match which he lost, leading to Bigelow being fired from the Corporation. The stable’s other big contribution was a very long-running angle where they stole The Undertaker’s urn, with a new member rising to maintain possession after Undertaker ripped through his current target like a hot knife through butter. The Corporation had actually ceased to exist by the time Undertaker finally regained his urn, so technically, they were successful in their goal. However, none of that can save them from being labelled one of the lamest stables in wrestling history.

This stable originated in ECW, where the original joke was that almost nobody in the group was actually Italian, but they acted like old Italian stereotypes anyway. So when WWE purchased all of ECW’s trademarks out of bankruptcy, and happened to have one of the original members on the roster, they decided to revive the FBI. Except they forgot the part where you’re supposed to wink at the audience and acknowledge that they’re not actually Italian, so the new FBI was literally just a stable of evil Italian stereotypes. Also, they were losers and quickly broke up due to the annual WWE Draft sending them to different brands. But WWE wasn’t done with the FBI quite yet, as an attempted rival of the entire ECW brand as a television show on the soon-to-be-renamed Sci Fi Channel gave the group one more chance at a comeback, again with a new roster of allegedly amusing caricatures. Unfortunately, the ECW TV show tanked, most of the original ECW concepts were quickly scrubbed from the show, and the FBI scattered to the four winds, never to be seen again.

Related ItemsFeatured
← Previous Story Owens Vs. Lesnar At WrestleMania 32 Would Be A Mistake
Next Story → Wrestling Gimmicks That Would Fail Today