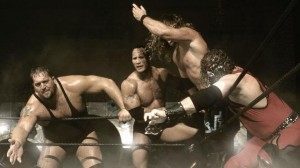 Thanks to the endlessly fun format of the Traditional Survivor Series Elimination Tag Team Match, the WWE Universe has witnessed the teaming of unlikely allies, the forging of new partnerships and the combining of singular talents that, under normal circumstances, would have no reason to team together. WWE fans have seen dream teams come into reality and, on occasion, the implosion of presumably unbeatable four- and five-man squads.

Through it all — the 25 Survivor Series events and dozens of Traditional Elimination Tag Team Matches — some groups have simply stood out above the rest. Whether it was due to their unique, never-before-seen lineups or their superbly impressive performances, these 15 Survivor Series squads are worth celebrating.

But don’t take our word for it. Take to the official WWE.com poll and add your voice to the conversation by voting for your all-time favorite Survivor Series team!