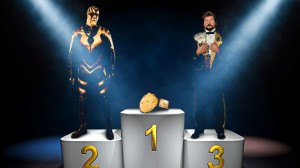 How would “Austin 3:16” be remembered if “Stone Cold” Steve Austin didn’t win a World Title to back it up? Would anyone want to play The Game if Triple H had failed to realize any of his 13 World Championship reigns? Could John Cena earn anyone’s loyalty or respect if “The Champ” was never … well, champ?

Celebrating a competitor’s World Championship wins may seem obvious when paying homage to the legends of the squared circle, but it isn’t mandatory. A select few grapplers still manage to earn themselves an all-world reputation – even WWE Hall of Fame status – despite never hearing their name prefixed with the title of WWE Champion, World Heavyweight Champion or the similar distinctions in WCW, ECW or AWA.

It may seem difficult to forge a storied career in sports-entertainment without winning a few World Titles along the way, but it’s not impossible. Take a look at these 20 battle-tested ring veterans who won the hearts and minds of the WWE Universe without ever winning championship gold on a global scale.