Home / Behind the Scenes / 50 NFL Players Who Became Wrestlers

By OWW Contributor on September 9, 2015@owwcom 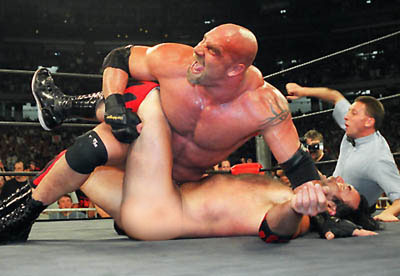 To celebrate another NFL season, we recognize 50 players who traded their helmets for tights with WWE and other pro wrestling promotions.

Some did much better in the squared circle, like Brock Lesnar and Roman Reigns.

Some, like William “The Refrigerator” Perry, made the most out of a brief in-ring stint.

And then there are the likes of “Chief” Wahoo McDaniel and “Big Cat” Ernie Ladd, who found themselves quite proficient on the mat and between the hashmarks.

(Credit: AP) Indianapolis Colts punter Pat McAfee prepares to throw a pass on a fake punt play against the Dallas Cowboys on Dec. 21, 2014. McAfee is used to improvising, as according to a 2014 Yahoo! Sports story he showed up at a West Virginia independent pro wrestling show in 2009 after graduating from the University of West Virginia. He was supposed to just sign autographs but ended up getting the in ring and scoring an impromptu victory over the War Pig.

(Credit: AP) Sabby Piscitelli played safety for parts or all of six seasons with the Buccaneers, Browns and Chiefs after being taken by the Bucs in the second round of the 2007 NFL Draft. But that wasn’t it for his athletic career, as he debuted for WWE developmental brand NXT in April 2015.

(Credit: Wikipedia user Mshake3) Mike Adamle played six seasons as a running back for the Chiefs, Jets and Bears from 1971-76 before embarking on a sportscasting career that included a stint hosting “American Gladiators.” He joined WWE as an announcer in 2008, and his uneven on-air ability was worked into a storyline that ended up with him becoming the general manager of Monday Night Raw. His most famous in-ring encounter came when he slapped Randy Orton — and lived to tell about it.