Home / Miscellaneous / A Comedic Tribute to The Iron Sheik

A Comedic Tribute to The Iron Sheik 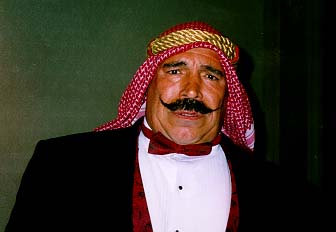 Tickets Now Onsale for “RING ROASTS I: A Comedic Tribute to the Iron Sheik”

Tickets have now gone onsale for the October 10 debut of Ring Roasts. The live event/dvd shoot is being co-promoted by Kayfabe Commentaries and Legends of the Ring and is being held at the massive, newly renovated Crowne Plaza in Monroe NJ, just off Exit 8A on the NJTPK. Tickets are available at the official website www.RingRoasts.com.

Tickets for the event are $50.00 for the standard ticket (includes the show and a light buffet cocktail hour) and $100.00 for a limited number of VIP tickets (includes a private 1 hour meet and greet with the stars of the show in a separate room, as well as a front row seat for the live event.) VIP ticketholders will be permitted to bring one item to be autographed by the stars of the show during the meet and greet.

The line-up paying comic tribute to The Iron Sheik thus far is as follows:

-Bill Apter, Roastmaster: Apter is probably the most recognizable and successful photographer/writer in the history of wrestling media.

-Brian Blair: Brian Blair debuted in pro wrestling’s great Florida territory in 1977, and his biggest success came when he joined the WWE in the 80s. During a shoot interview several years ago, seemingly out of nowhere, the mere mention of Blair’s name threw Sheik into a tirade, where he repeatedly threatened to break Blair’s back and humble him “old country way” by cornholing him. Now, for the first time, Blair gets his opportunity to respond!

-Don Muraco: The relentless heel had legendary feuds with WWE stalwarts like Bob Backlund, Pedro Morales, Tito Santana, and Jimmy Snuka. The Iron Sheik credits Muraco as being one of his favorite party pals, and deems Muraco a former “Medicine Man” of great stature.

–Nikolai Volkoff: Nikolai and his tag team partner The Iron Sheik made
history at Wrestlemania I when they won the WWE tag belts. Nikolai spent years traveling with Sheik, and one can only speculate what skeletons might fall out of his mouth when he takes the podium on October 10!

-Mike Morse: Mike was a winner on ABC’s America’s Funniest People and was host and head writer of Fox’s Comedy Cabaret. His work has been featured on Fuse, ESPN, and The Howard Stern Show.

-Adnan Al-Kaissy: Known as Sheik and General in his illustrious career, Al-Kaissy was born in Baghdad, Iraq and was a classmate of Saddam Hussein. His pro wrestling career took him all over the US, before landing in the WWE in 1991 where he managed Sgt Slaughter with…guess who…The Iron Sheik, at that time known as Col. Mustafa, for some reason.

-Round Boy Jimmy Graham: Jimmy has opened for national headliners such as Jim Norton, Rich Vos, Gilbert Godfrey, Jim Florentine, and Lisa Lampanelli. Jimmy is also at home over the radio airways with appearances on XM’S Opie & Anthony.

-Tom Brandi and King Kaluha: Tom worked as The Patriot as well as Sal Sincere, and has worked for WWE, WCW, and ECW. He broke into the business in 1985 after being trained by King Kaluha. Brandi and Kaluha have decided to “tag team” their set for a wild ride at the roast!

Tickets can be purchased online at www.ringroasts.com.