Home / Indies / A Matter of Pride

A Matter of Pride 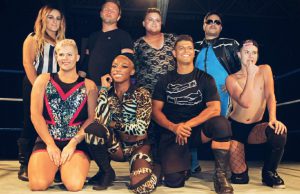 A Matter of Pride: Cataldo, NYWC Working to Bring Down Barriers for LGBT Wrestlers

From Gorgeous George to Goldust and Adrian Street to Adrian Adonis, pro wrestling has seen its share of “gay” characters. For decades, the effeminate wrestler was easy heat or comedy, playing on broad stereotypes and prejudices.

But sensibilities change. And Rick Cataldo wants to see those changes reflected in the ring.

Cataldo and the New York Wrestling Connection have promoted a pair of LGBT-friendly events dubbed “A Matter of Pride.” The first “Pride” event was held in September 2016. “Pride 2” took place in June.

“I always had a concept of starting a movement for LGBT wrestlers in the states after I had the pleasure of working with and learning from (lucha libre exotico) Cassandro in 2010,” Cataldo said. “I wanted to replicate the exoticos division on the Indy scene in America. Unfortunately I was the only one around for a while, a flamboyant wrestler actually played by an open gay person. I stuck around long enough and I see times are starting to change and a lot of LGBTQ youth are breaking into the business.”

Cataldo has been wrestling for 12 years and has been a fixture in WSU where he is a two-time tag team champion with Eddy McQueen as The Fella Twins. He has achieved success, both in tag team competition and in singles matches as “The Boy Diva,” but he said opportunities are limited for gay performers who incorporate their sexuality into their ring persona.

“Even in the north east, we are booked as novelty act and pitted against other LGBT acts, bookers and peers alike telling us there is only room enough for one ‘gay’ act,” Cataldo said. “I figured now is the time to start a movement, and it has to be me to start the fire as the veteran, mentor, and trend setter of the current crop of LGBT wrestlers.”

Cataldo pitched the idea of a FGBT-themed event to the promoters of NYWC and they decided to run with it. The first Pride show featured Cataldo, McQueen, Tommy Purr, DJ Hyde, Bull James, and Sonny Kiss, among others. A 50/50 raffle was done to benefit the victims of the Pulse nightclub shooting in Orlando. The event provided an atmosphere of inclusion and equality, with pro wrestling as the shared passion regardless of sexual preference or gender identification.

“Several fans came up to me and said how excited they were to attend an Indy show (and that they were) usually scared to be seen in the crowd, only comfortable behind a keyboard. The crowd itself bonded very well just as the locker room did,” Cataldo said.

The event was successful enough to spawn a sequel, with future events likely.

Cataldo said the Pride events have helped openly LBGT wrestlers come together as a family.

“We never really belonged, or sometimes flat out not welcomed into the boys club or the women’s locker rooms,” Cataldo said. “Now we rely on each other, to push each other, lift each other, put one another over. We understand the essence of thriving to individual success by standing by one another. These shows have really evolved from a social experiment to a family reunion, or sorts.

“Between those shows, we have come together as a community,” Cataldo said. “We’ve traveled together, organized special fundraisers and charitable events. We’re working to break down the barriers in wrestling.”