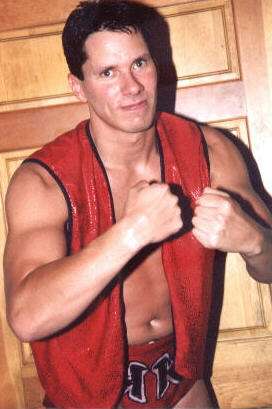 A Perspective on IWF Wrestler Kevin Knight:
“If you want anything done right, do it yourself.”

(WEST PATERSON, NJ)- When the average fan of professional wrestling thinks about the industry, two main brands come to mind: WWE and TNA.

Why are these two brands the only ones that are recognized?

Well, that comes down to many things: corporate sponsorship, prime time air time on television stations, pay-per-view time, pyrotechnics, ratings, merchandise, appealing to a broad spectrum of an audience, and other issues.

Has professional wrestling changed with the times?

In order to appeal to the growing fan base, the WWE and TNA are forced to move away from a pure idea of wrestling and turn professional wrestling into a male sitcom that appeals to older men and young children.

One person that this has become extremely evident to is Kevin Knight.  Kevin Knight is the founder of the IWF, the Independent Wrestling Federation, based out of West Paterson, New Jersey.  Knight started his love of wrestling was he was 10-years-old.  The first match that he remembered as a child was the Iron Sheik vs. Sgt. Slaughter in the Boot Camp match in 1984 at Madison Square Garden.  Although as a child he told his older brother that professional wrestling was fake; this match launched his dream to push academics to the backburner and placed wrestling on the forefront of his attention.

When Knight made it to college, he was a DJ on the college campus station.  The independent wrestling promotions gave tickets to the station, he would give them out to the students, and he would also find his way to the shows.  Promoters at the venues noticed his talent to work the crowd and shortly after that in 1996, Knight found himself in the middle of the squared circle doing what he had always dreamed of doing.

While training for his professional career, Knight realized that there was something flawed with the ideas and fundamentals of the training that he was receiving.  In doing this, he decided to found the IWF wrestling school.  In doing so, he not only made a standard for New Jersey professional wrestlers, but he continued to gain knowledge on his own career as well as knowing how to teach the future of the industry.

How the IWF differs from other schools is that the IWF not only brings in legends to impart their knowledge onto the students, but they have been around since December of 1999 and have gained the respect and attention of the WWE and have had 21 graduates of the school have opportunities to go mainstream with the WWE.

In comparison, this differs extremely from The House of Hardcore that Taz ran in the glory days of ECW because they had two graduates that ended up making it in ECW as legitimate hardcore guys that appreciated the business.

Going along the lines of different, the IWF is one of the purest forms of entertainment in the minor leagues of wrestling.  IWF has no microphones in or around the ring while a match is going on.  There are set interview times before and after matches to set the stage for the current match.  There are no feuds or verbal beatings that happen in the middle of the ring.  Everything else is strictly wrestling.  All of the entertainment and storytelling is done in the ring.  Now that WWE has moved back to drawing the ideas and attentions of children, Knight feels that this has helped out IWF in its successes.

“You can’t build a company or franchise without young fans.  During the ‘Attitude’ era when the WWE was competing with shows like Law and Order and CSI Miami they felt that they needed to have edgier content.  Kids are always going to be drawn to wrestling because of the larger than life super heroes that kids can follow and understand the story lines.  WWE needs to be responsible to censor what is shown,” stated Knight.

Knight does his part to maintain this status quo.  The IWF throws birthday parties for younger children on top of their normal live shows once a month.  This allows for the younger generation to enjoy what Knight himself enjoyed when he was young watching professional wrestling in the mid ‘80’s.  This atmosphere allows for the athletic competition and the characters in the ring to be the focal point and does not allow for types of matches and sitcoms to overcome the psyches of the fans.

As UFC has hit the mainstream of popularity, there are dominant contrasts between both. Knight feels that there are “two different genres” that gain the attention of the same classification of sports.  UFC is solely fighting and training for said fights. Professional wrestling is more about performing a storyline that involves a certain level of athleticism.  Both of these premises do however follow the same formula: good versus evil, fighting it out in the ring.  Knight presents the similarities through the idea of the Ultimate Fighter.  Both coaches face-off in team battles until the ultimate finale where the finalists of the tournament face-off and then the coaches face-off to dispute feuds that happened throughout the season.

Now that Kevin Knight has given everything back to the business and has been doing the same thing for over a decade, he says that he has accomplished everything that he wanted and that he really has no other goals in his career that he would like to achieve.

“As long as the parents keep booking the parties and as long as you keep waking up and wanting to keep learning, you keep doing it until the people stop showing up.”

“If you want anything done right, do it yourself,” and “the day that you wake up and think you have learned it all, you are done,” are the best pieces of advice that Knight would give to those aspiring to become a professional wrestler.

While going back over the tapes of the interview, I have come to the realization of the quote that Knight gave at the end of the segment.  Not only did he take his own advice and decide to start a better way of training, but in doing so furthered his legacy within the business without ever having to step foot inside a WWE or TNA ring to make him known amongst the mainstream.

His brainchild has grasped the attention of superstars of yesterday and has ignited them to impart their knowledge on the new generation and this has in turn allowed for Knight’s students to make it to the WWE.  Through them making it to the prime time, so has Knight.

Sure, he may not be able to have his own entrance music or entrance video played on the Titantron for all the endearing fans to recall when they come home from a live event, but Kevin Knight will forever go down in the history books as the guy that gave the future of the industry their opportunity to make it big and become stars.

Not everyone is given that opportunity to lead the future to the “promised land,” but I honestly feel that through the help of the legends of yesteryear and the open-mindedness of his own desire Kevin Knight will be as successful as any other professional wrestler as long as he maintains the same drive and passion that he had when he first became hooked on the drug that is professional wrestling.