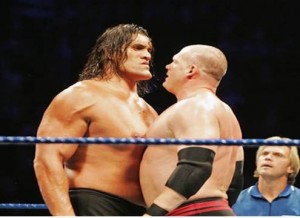 At 7-foot-1 and weighing 347 pounds, Singh, a former police officer in India’s Punjab province, made his WWE debut in 2006, and won the World Heavyweight Championship belt just a year later. But while his dimensions have earned him celebrity status, they are the result of a tumor that likely triggered long-term complications for his health.

The benign tumor developed on Singh’s pituitary gland, a tiny gland at the base of the brain that produces growth hormone. The tumor caused excessive secretion of the hormone, leading to a condition known as acromegaly, which causes gigantism if the tumor is active before puberty and can be fatal if left untreated, said Dr. Joshua Cohen, an endocrinologist at George Washington University.

Despite the surgery on Wednesday, Singh, 39, is at greater risk of facing health problems such as diabetes, hypertension, heart disease and even poor vision if the tumor came into contact with the nearby optic nerves, Cohen said. In 1993, star wrestler Andre the Giant, who stood at 7 feet and 5 inches, and weighed 500 pounds, died at age 46 of congestive heart failure caused by acromegaly.

Susan Manko, a spokeswoman for University of Pittsburgh Medical Center, where Singh was operated on, said Singh was “recovering well in the hospital” and is expected to be released by Monday. Singh has declined to speak to reporters until then, Manko said.

Related Items
← Previous Story The Boogeyman discusses his career in a recent interview!
Next Story → Kaufman and “The King”: 30 years later