AEW has suspended Sammy Guevara for the 2016 comments he made about WWE Women’s Tag Team Champion Sasha Banks.

AEW issued a statement on the comments this afternoon and said that while he is suspended until further notice, Guevara’s salary will be donated to the Women’s Center of Jacksonville, Florida. Sammy will also undergo sensitivity training and then his future with AEW will be re-evaluated.

“AEW insists on doing our part to create a world of understanding and respect for humankind. We therefore strongly condemn the extremely offensive and hurtful words of Sammy Guevara. As such effective immediately, Sammy is suspended without pay until further notice. Sammy has agreed to undergo extensive sensitivity training and, upon completion, his future status within the company will be re-evaluated. During his suspension, his salary will be donated to the Women’s Center of Jacksonville.”

As noted, Sammy appeared on a 2016 podcast after working as an extra for WWE and commented on how he thought he’d like to rape Banks.

“Bro, Sasha Banks… oh my God. When I was at the WWE the other week I wanted to just go f–king rape that woman,” Guevara said during the 2016 podcast.

Banks and Guevara both revealed on Twitter this afternoon that they had an open discussion about Sammy’s controversial remarks. You can read their comments, along with Guevara’s apology, by clicking here.

Below is AEW’s full statement: 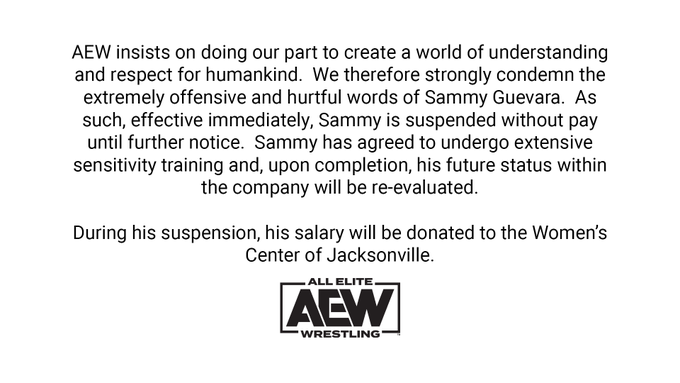