Home / Podcasts / Al Snow on In Your Head Online

Al Snow on In Your Head Online 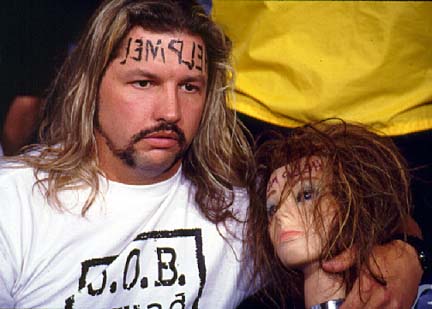 Jack and Oneinchbiceps welcomed Al Snow for his second appearance on the program who cheerfully quipped that he’s getting older and crazier as the years go by.

Al Snow mentioned that he’s at an independent wrestling show (or sports entertainment venue as he likes to call it) right as they speak, as he’s so talented he can talk on the phone and ‘sports entertain’ all at the same time.

Jack asked if he really calls it “sports entertaining” or wrestling; Al said he believes that no matter what you call it, it’s still the same as it was back in 1900; he was trained to be a professional wrestler and has been for 26 years. Jack then asked if Al found anything offensive with the term “sports entertainment,” and Al replied that it’s just another term for wrestling and contrary to what a lot of other people want to believe, professional-wrestling is only the 2nd and true American art-form other than Jazz.

Jack let everyone know that Al Snow will be a part of Fan Slam which is a wrestling fan-festival being held on June 21st at the Holiday Inn, Totowa, New Jersey, where as well as Al Snow you will have the opportunity to meet the likes of Scotty 2 Hotty, Tyson Tomko and Eugene. Al said it’s literally going to be a showboat of large, sweaty men. You can find out more information about the festival at http://www.fanslamwrestling.com

Jack and Oneinchbiceps then took a call from Jai who asked if Al was still running his wrestling school; Al replied that at the present time he’s not, but sometime in the near future he plans on opening another one. Jai then asked what Al’s take on the Hogan situation is; Al said that he thinks it’s a shame and that he feels a lot of empathy towards Hogan and his family. Jack mentioned that Jai is actually an aspiring wrestler; Al advised Jai to stay in high-school and go to college to get some kind of degree because you just don’t know what’s going to happen in this hard business. Jai then asked if Al’s going to do another Tough Enough; Al said there has been a lot of talk and a lot of rumours about another Tough Enough but nothing has come of it yet. Jack also added that a previous guest told Jai that Tough Enough isn’t necessarily the best place to try and get into wrestling; Al disagreed because in Tough Enough he would train guys the way he was trained and that he isn’t trying to make a TV-show, he’s trying to teach guys what they need to know about the wrestling business. Al said he thinks that Tough Enough is a great place to start because it gives you exposure and allows you to build a character.

Jack asked Al if he’s pleased to see John Morrison, a Tough Enough success story, doing so well in the WWE and Al responded that he’s thrilled to see anyone he trained do well as it is a good reflection on him. Al reiterates his previous point by saying how difficult it is to get into wrestling and that aspirant wrestlers should treat the business with respect and care because back when he was starting out, if anyone screwed up, the person who trained them would be accountable.

Jack then asked if someone came to Al looking to be trained who, whilst they have a passion for wrestling, just doesn’t have the right charisma or size to make it, what would Al tell them; Al replied that he would counsel them to explore other avenues into professional wrestling, like a promoter, referee, ect…

The IYH crew then took a call from Steve who asked Al if it was true that he put Val Venis’ personal cell-phone number up on RAW as a rib and if Val has ever gotten him back for that; Al admitted it was true but says Val has never gotten back at him.

Jack asked Al if the Pepper angle was based off anything; Al replied that it was based on a story about Mr. Fuji killing a neighbourhood dog that he hated and turning said-dog into dinner which he in turn served to the owner of the dog.

IYH fan Andre then called in and asked that after he threw Mick Foley’s book in the garbage-can, did Al think he would get a big push; Al said he didn’t think he was going to get a big-push, but it was an opportunity and every time he went to the ring he had an opportunity. Andre asked about Head Cheese with Steve Blackman and if there was ever any talk of them winning the tag-belts; Al said he didn’t know if there was any talk of them winning the titles and that he feels he missed an opportunity because he made himself into too much of a comedian, and even though it was entertaining, Vince McMahon wanted him to be more serious. Andre then enquired about whose idea it was for Al Snow to come to ring as different gimmicks when he was the European Champion back in 2000; Al said it was one of the writers, Brian Gewirtz, who had the idea about him representing different European countries. Andre then asked whose idea it was for the Unforgiven ’99 ‘Dog Kennel from Hell’ match; Al said it certainly wasn’t his but he thought it could’ve been a good idea if they had brought in trained attack-dogs.

Jack then mentioned Al Snow’s comment about being too entertaining and brought up a quote from Jerry Lawler about “funny equalling no money,” and asked Al if he agreed with that; Al said he wouldn’t necessarily agree with that because you can always find a balance where you can be entertaining and funny but believable.

IYH fan Spartan (I think that was his name) then called in and said there’s a lot of former WWE guys that should still be with the WWE, with Al Snow being one of them; Al thanked him and said that while that’s true, the WWE also needs to give TV exposure to the younger guys who are going to be around for awhile. Spartan countered by saying a lot of the younger guys are boring, naming Santino Marella as one of them. Both Jack and Al disagreed with that sentiment with Al adding that Santino has a lot more to show the fans. Al said he was a very talented individual and he was very fortunate to train him back in OVW. Spartan then asked if Al feels he would fit better on the TNA roster; Al said he was a professional wrestler and that he’ll go wherever they pay him. Al said if either TNA or WWE wanted to utilize him he’d be more than happy to wrestle for them.

Jack encouraged anyone who wants to meet Al Snow to go over to www.fanslamwrestling.com and find out more information on their upcoming fan-festival.

IYH then took their last caller of the night, El Santo, who said Al Snow had the greatest ECW entrance; Al thanked him. El Santo then asked Al’s feelings on the new ECW; Al said he thought it was great but he knew it was never going be the same ECW of old because of the different time and talent and the fact it was being operated by Vince, who had a different vision for the product. Jack asked if old ECW fans might take to the new ECW better if it had a different name due to the talented young guys on the show; Al said no but thought the show would develop its own identity after awhile. Jack mentioned that last time Al was on the program he put over Armando Estrada and asked if he was happy to see him get in the ring; Al said yes because once again any guy he trained that becomes successful is a positive reflection on him.

Al then had to leave the program but encouraged any fan that didn’t get the opportunity to talk to him tonight to come meet him at the Fan Slam and ask him a question there. Al then thanked the IYH guys for having him on and said he’d be happy to come back on the show anytime and talk for a little longer.

To hear the interview, head on over to www.inyourheadonline.com and remember to check out the show live every Wednesday 8pm EST where this week they’ll be joined by Chris Cruise. You can also check out their 3 year interview archive which guests such as Mick Foley, Chris Jericho, Rob Van Dam, Terry Funk, Goldberg and Eric Bischoff.