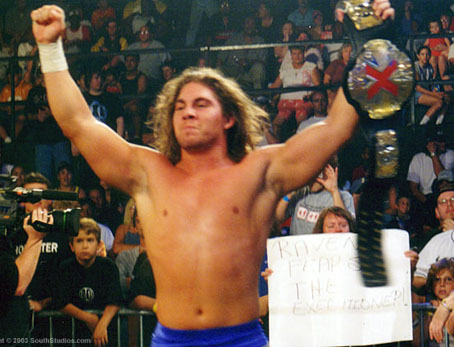 Please credit Alan J. Wojcik of http://alanwojcik.com if used, thanks.
Â
Â Â  You can call him Michael Shane, â€œMaverickâ€ Matt or even Martyr. No matter the name used, you are talking about the one and only Matt Bentley who has been in the wrestling business since 1999.

Â Â  If you ever wondered about Mattâ€™s career or some of his famous matches against the likes of Paul London then the new DVD MATT BENTLEYâ€ MY PERSPECTIVE needs to be in your collection. This is unlike any â€œshootâ€ interview you have seen released. This is told from Mattâ€™s point of view with no interviewer talking over him. This DVD takes you from his training days at the Shawn Michaels Training Academy to his current tenure with TNA Wrestling.

I am sure readers are wondering if I found anything wrong with the DVD and I did, I kept thinking it should be longer than two hours because Matt gives a great interview. Matt talks about his fast rise in the business to Japan and ECW because of being trained by WWE superstar Shawn Michaels and how things got confusing in 2001 when WWE bought WCW and ECW went bankrupt. Matt talks of his struggles on the Indies while he was trying to get work with the WWE after numerous tryouts (I didnâ€™t believe the number when Matt talks about it) and his experiences with ROH and TNA.

Also unlike other shoot interviews, when a topic ends Matt provides in-ring footage of the topic. From a TWA Tag Team Tableâ€™s match (as part of the team â€œMore Than a Handfulâ€), a Title for Title match with Sho Funaki, the Ladder match with Paul London, you get full length matches. In addition the bonus matches include an ECW fan-cam bout with Chris Chetti, an ECW fan-cam match against OZ and his TWA debut in a handicap match against then champion Venom.

The DVD can be ordered one of two ways, by visiting www.officialmattbentley.com or www.myspace.com/realmattbentley or send $20.00 plus $5.95 for shipping (total of $25.95) in check, cash, or money order payable to:

Related Items
← Previous Story AS I SEE IT: by Bob Magee – PWBTS.com
Next Story → Alan Wojcik’s Statment on Laptop Banning