Home / Behind the Scenes / Alberto Del Rio talks about his firing 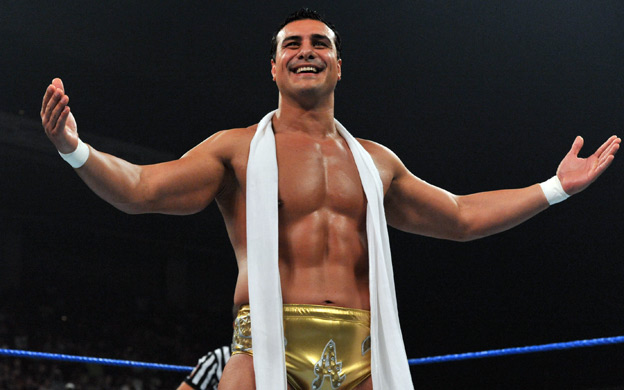 On being fired, Del Rio said there was an incident, an altercation with a WWE employee, that one day he’ll give all of the details on. Right now he’s assessing the best way to do so via legal means, so that everything he says isn’t used against him, since legal matters in the U.S. are handled differently than they are in Mexico.

He said there was an incident where he was offended, where he was completely the victim. He said WWE made a statement that he displayed unprofessional conduct, and that yes it’s true, that he smacked the WWE employee because as he always says, you can take away his job but you can’t take away his dignity and his pride, nor try to offend or humiliate where he comes from, which is of course Mexico, and he doesn’t forget his roots. This problem led to the termination of his contract with WWE.

The interviewer asked if ADR was the victim of racism. Alberto says yes, that there were comments this employee made, and that he admitted he reacted in an inappropriate manner. He said that he wouldn’t advise anyone to conduct themselves in the manner that he did. He admitted that he “smacked” the WWE employee and that he is completely embarrassed by his own attitude and by his own reaction, but in that moment, he demanded an apology.

The interviewer interrupted ADR and asked what the employee said to him, Alberto says that part he’s gonna keep to himself for now. He said he’s a few days away from being able to tell the world exactly what happened. He said that a lot of people know what happened because there were many people present there in the WWE catering area. The interviewer asks who else was there, Alberto says right next to him was Jack Swagger, one of the referees was behind him, people from the crew, etc. They were all eating in Laredo, Texas at a TV taping.

ADR said he spoke to Vince McMahon after the incident occurred and everything appeared to be fine. Interviewer backs up to the incident, Alberto says someone said something to the WWE employee, and when he responded to the comment, the response was directed at Alberto.

The interviewer asks if he’s had any incidents with this employee before and Alberto says yes. He said that “a while back” there was a time the WWE employee was pretending to read something on his laptop and said, “It says on here Alberto is a ‘tal por cual’ “ (Mexican slang for a slut) and that he tried to play it off like it was a joke and shake Alberto’s hand. Alberto refused and told the employee to get away from him. He said this incident occurred 7 or 8 months prior to the slap. So when this incident occurred recently, Alberto demanded an apology, but that the WWE employee walked right up to Alberto’s face, smirked at him and said nothing. That’s when Alberto smacked him. Again, he said he is embarrassed by his reaction, but he doesn’t regret it. He said that yes, it cost him his job, but he thinks WWE is the one who loses the most in this situation.

The interviewer asks if it was another wrestler who he had this incident with, Alberto says no, that it’s their Social Media Manager. He says he never even knew this person’s name until after all of this happened. WWE released a statement saying Alberto was fired due to unprofessional conduct, but he wonders why they didn’t mention there was an isolated incident that led to his unprofessional conduct.

Alberto said after the incident happened, Vince McMahon asked to speak to him. Alberto said that Vince himself told him that he understood where Alberto was coming from and why he was upset by the comment, because first he’s insulted and then after the insult the guy smirks in his face. Vince said that he understood ADR’s reaction. Everything appeared to be fine after his talk with Vince.

ADR was suspended the next day, which he understood, but that for reasons WWE later decided, they changed their mind and was let go.

Alberto said Triple H called him Thursday morning and told him that it hurts WWE more because they’ve invested a lot of time and money into him, but that they need to let him go. Alberto told him that it was fine, and that once his release was made public AAA contacted him, Japan contacted him, some North American promotions as well.

Alberto said that he has not had any other conversations with WWE since his release, but that word got out of what happened from other people who witnessed the incident occur.

He said going forward, he’s using El Patron now since WWE owns “Alberto Del Rio” (his real name is Jose Alberto Rodriguez). They asked him if he’s going to sue WWE, he said he’s not sure. He said that the reason he went to a lawyer is because when he received his release in the mail, they mentioned he couldn’t wrestle in the United States for a year. ADR admitted he’s not fully familiar with the laws in the U.S. but he thinks it’s unconstitutional to prevent him from wrestling, since that’s how he makes a living and feeds his family.

Del Rio was asked if he wants to wrestle again in the U.S. He says no and that he was already considering not signing a new contract when his contract was up next February. He said he wasn’t sure if he was going to stay or go, so he’s not sure what would have happened, but unfortunately this incident happened which forced him out of the company. He spoke with his wife after he was let go and decided he wasn’t going to pursue legal action against WWE, but then he received his termination letter with the 1 year no compete clause and that changed everything.