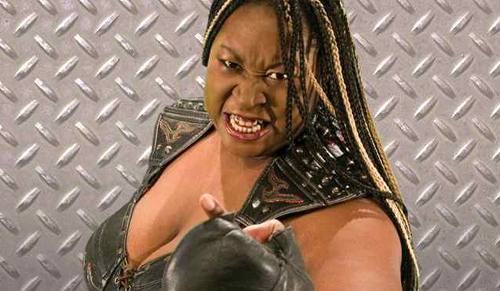 Yesterday, news came from Japan that Kia Stevens AKA Amazing Kong AKA Awesome Kong has retired. She was to appear on the Nov. 25 SEAdLINNNG show. This is the new joshi company owned by Nanae Takahashi. Apparently doctors have forced her to retire from pro wrestling. She sent a note of apology to SEAdLINNNG. AK has worked recently for TNA and if you have seen any of her matches, her back is so bad she can’t move anymore. She said in her apology that doctors have been trying to get her to retire for the last year. When they advised her not to travel to Japan, AK decided to retire from pro wrestling. Amazing Kong is one of the most unlikely success stories in joshi puroresu. Along with Rhonda “Monster Ripper” Sing, she was the most successful gaijin monster heel in joshi history.

Back in 2001, ARSION owner Hiroshi Ogawa was also booking All Japan Women. Aja Kong left ARSION for GAEA and then sued Ogawa for falsely advertising her appearing on a show. Aja would eventually win that lawsuit. Also, Manami Toyota left AJW for GAEA. Ogawa got Yumiko Hotta to crash a GAEA show and challenge Aja to a real fight. Aja turned her down. But Ogawa announced at a press conference that “A Kong” would appear for AJW. That would turn out to be Kia Stevens as Amazing Kong. At the time she was training at the Inoki Dojo in Los Angeles but she had not wrestled a match yet. So AK was very green when she moved to Japan and Kaoru Ito deserves a lot of credit for training her. And that’s why AK was successful in Japan. She was more than a novelty and she was very agile for her size. After AJW and GAEA closed in 2005, the writing was on the wall and AK was probably going to have to leave Japan.

She signed with TNA in 2007 and had some classic matches with Gail Kim. After Gail left for the WWE and Knockouts booker Scott D’Amore left, the Knockouts division deteriorated and AK left after attacking Bubba The Love Sponge backstage. She appeared briefly for the WWE but was sidelined by pregnancy. She had a miscarriage. The WWE told her she would need to lose weight before she could return. In an attempt to recreate AK’s magic with Gail Kim, TNA brought AK back this year to replace Jessica Havok who had no chemistry with Gail. It didn’t work out as they were hoping because AK was clearly hampered by back problems. They tried to work around it but AK just couldn’t do what she used to do. We will miss Kia Stevens but retirement is probably the best thing for her health. And that’s the most important thing.