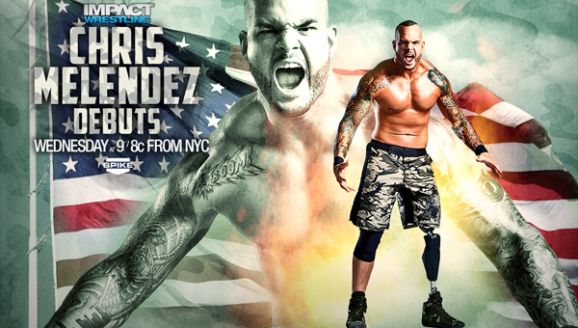 After much hype and appearances on major news programs across the country, this Wednesday will give fans their first opportunity to meet Chris Melendez, a true American war hero and the newest signing by TNA Wrestling. Before you tune in to witness “Sarge” arriving on IMPACT, take a moment to read about his journey.

Chris Melendez is a former Army Sergeant, who served his country in Afghanistan and was awarded a Purple Heart. Because of injuries suffered in combat, the brave soldier returned home a single leg amputee. Melendez, a member of the Wounded Warrior Project, had another dream to realize when he returned home. He dreamed of becoming a pro wrestler.

Chris’ remarkable story begins as a kid growing up in Spanish Harlem. His grandmother introduced him to professional wrestling at a young age and, ever since, he has been hooked.

“The ability to captivate an audience without having to say any words is what got me hooked.”

Inspired by his father, a Vietnam Vet, and compelled by the events of September 11, Chris joined the U.S. Army at the young age of 17. At age 19, and with only 23 days of his Iraq deployment remaining, he sustained horrifying life-threatening injuries from an IED.

“When I was able to open my eyes after the explosion I looked across the battlefield to see what I thought was a fellow-soldier in need of help. I quickly realized it was my leg.”

After being resuscitated three times and enduring numerous emergency surgeries and procedures, Melendez’s long road of recovery took him to Brooke Army Medical Center in San Antonio, Texas. Through pure grit and determination, cutting edge science and technology delivered via the VA, and support from friends, family and The Wounded Warrior Project, Melendez was walking with a prosthetic within 40 days.

In 2012, Melendez entered Team 3D Academy of Professional Wrestling in Florida where he trained day-in and day-out under the tutelage of Bully Ray and Devon.