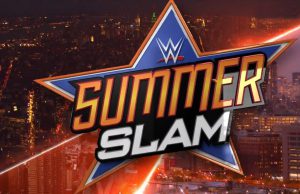 A lot happened over the past three days. Drew McIntyre continued his comeback by beating Robert Roode for the NXT title, only to be laid out by a trio of former ROH stars led by Adam Cole. Asuka beat the odds and retained the NXT women’s title over Ember Moon, though she suffered an apparent injury in the process. A handful of secondary title changed hands at SummerSlam, but WWE champion Jinder Mahal and Universal champion Brock Lesnar managed to survive. And, of yeah, John Cena is back on Raw and looking for a shot against Roman Reigns.

The Internet is awash in recaps, so let’s focus on the big picture and take a look about what the past weekend means for some of the stars of NXT and WWE. Here are five people celebrating one of the best weekends of their career, and five others wondering what happened:

Brock Lesnar – Since it seems increasingly unlikely that anyone will be able to defeat “The Beast” in a singles bot, a multiple-man match made it look obvious that a new champion was going to be crowned without Lesnar taking the fall. Instead, Lesnar proved even more dominant and destroyed the field. Good for him. If someone is going to take that belt from him, it should be in a one-on-one match where the proverbial torch can truly be passed.

Jinder Mahal – Again, no one expected Jinder to ever win the title. And even his biggest supporters had to have their doubts about whether he could stave off Shinsuke Nakamura. Mahal lived to fight another day while Nakamura – certainly a star attraction – has now been in WWE for a year and has yet to hit his peak.

Dean Ambrose – Two-thirds of The Shield are back together, and that’s great for Dan Ambrose whose shtick had grown stale on its own. Ambrose and Rollins feed off of one another and can make a great team … until Dean invariably turns on Seth in the not-too-distant future. Ambrose hasn’t forgotten when Rollins chair-shotted the tar out of him and smashed a cinder block on his leg. The receipt is coming. And Ambrose is at his best as a heel.

Asuka – The thing about streaks is that – usually – once people begin talking about them, they’re about to come to an end. Look at CM Punk’s tirades about the length of his WWE Championship reign toward the end of his run or The New Day crowing about their tenure. Ember Moon had all the momentum after returning from injury. This was her moment. But Asuka took it away from her.

Adam Cole – Cole could have been positioned a lot of different ways in NXT. He’s not the biggest guy, not the strongest guy, not the best high-flyer, and not the best technical wrestler. But he’s at his best when he’s the evil mastermind, and that’s what we got when he showed up in Brooklyn. Just like that, Cole has leapfrogged the competition and established himself as a NXT title contender.

Samoa Joe – Joe wants to be the behemoth that Lesnar is, but after failing to beat Brock on his own, and then failing to make the most of his opportunity in a four-way match where Reigns and Braun Stowman were also gunning at Lesnar, it’s hard to see “The Samoan Submission Machine” as the bad-ass he claims to be. It was put up or sit up time for Joe, and he didn’t put up.

The Hardy Boyz – Only a few months after delighting the WWE Universe with their surprise appearance at Wrestlemania, the Hardys curtain-jerked a six-man match in front of an almost empty arena (due to delays in opening the doors of the Barclays Center). Even if the Impact Zone, they had more fans watching them … hell, there may have been more people on set at the Hardy Compound for those vignettes. And, to make it worse, they lost to The Miz. Looks like there was a short shelf life on the Hardy comeback.

Jason Jordan – Jordan has Kurt Angle as his dad and can’t even get the Erik Watts treatment. He jumped from Smackdown to Raw, was revealed to be Angle’s son, and then went into a slump that should have “The Olympic Hero” calling Maury’s people for a paternity test.

New Day – Remember last year when The New Day was beating The Usos for times a week? We sure do. Maybe The New Day train has run out of steam. They’re not the draw the were a few months back.

Ember Moon – She lost to Asuka at TakeOver. That probably means WWE wants her on the main roster sooner than later. Maybe as an opponent for Natalya on SmackDown?

The Authors of Pain – AOP could be the dominant power team that we expected with The Ascension but never got. With Paul Ellering at their side, they would make an attractive edition to the Smackdown roster.