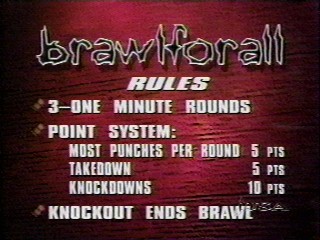 THE BRAWL FOR ALL
Another WWE Black Eye…Literally
Originally published May 23, 2003
Written by Emer Prevost

Anyone remember the Toughman competition? You know, that sport where redneck wannabe boxers step into a cheap ring in a seedy arena and beat the crap out of each other? You may have seen it on the FX Network, and it still sucked. Well, this 24 year old sport is the last thing you would expect the WWE to rip-off of, right? Well, if you thought that, you haven’t been watching the WWE for too long, or you have simply phased out the Brawl For All tournament.

What? You don’t remember the Brawl For All, either? Man, where have you been? This was the WWE’s attempt to cash in on the Toughman tournaments, which were just starting to grow in popularity. And, not being gods of originality, Vince and his crew worked quickly to build something from a seemingly quick burning fad. The results will be shown in the following paragraphs. So, grab a soda and some popcorn, ‘cuz it’s showtime, folks!

The WWE’s rules to the Brawl For All were modified from the Toughman rules, less rounds (three rounds instead of five) but longer round length (three minutes as opposed to one minute), and the Brawl For All handed out points for takedowns, knockdowns, and total round domination. So, it is Toughman, but with a UFC style scoring method.

But, here is the kicker. Where everything else the WWE has ever thrown at us was staged, scripted, and rigged, the Brawl For All was all legit. Every punch was a real tooth rattler, and every knockout was a natural knockout. After a single tournament, marred by injury and questionable advancing, it is no wonder why Vince McMahon hasn’t opted to have another tournament.

Once more, we shall jump into the Wayback and head to June 29, 1998, the night that the Brawl For All tournament began..

The first round opened on a lighter note, as Marc Mero (the only fighter in the tournament who was a Golden Gloves winner) was defeated by Steve Blackman. But, because Blackman was unable to compete in the second round due to injury, Mero advanced anyway.

The next match was between Bradshaw and Mark Cantebury. Naturally, these two bruisers went at it in a decent match. In fact, there really was only one horrid match, and I’ll cover that one when we get to it. In the end, the future Acolyte won over the former hog farmer.

Next up, Savio Vega fought Brakkus. I really don’t remember this fight at all. But, I also have no memory as to who the hell Brakkus was, so I guess it is no big deal. Brakkus lost anyway, so I guess we will never know who he was.

Here is a match that ended up making absolutely no sense. Hawk and Puke (Droz) fought to a draw. No big deal, right? So, how did Puke advance? Beats me. According to the tournament bracket, because Hawk was injured during the fight, Puke got to advance. Even though it ended in a draw, Puke still fought Savio in the second round. Whatever. I didn’t book it, so it isn’t my problem.

Then, we saw as the New Midnight Express exploded. Alright, so the team disbanded before their Brawl For All match, I just like mentioning bad gimmicks. Anyway, Bob Holly and Bart Gunn fought, and Bart won. These matches were all really short, so saying that something that couldn’t have gone more than nine minutes was one hell of a fight would be a bit of a stretch.

The rest of the first round was nothing special. The only real news is another loser advanced, but not because of injury. It seems that Dan “The Beast” Severn withdrew from the round and Kama Mustafa advanced in his place. Maybe Severn didn’t want to risk being in the same boat as Hawk and Blackman. It seems Severn isn’t as stupid as most people think he is.

In fact, the rest of the tournament really wasn’t all that good. I mean, I love boxing, but the Brawl For All wasn’t exactly entertaining. I love seeing guys with big heavy gloves beat the crap out of each other, but the WWE’s answer to boxing wasn’t the same. Maybe it is the fact that three eighths of the fighters in the second round didn’t earn their way in.

The second round, like the first, was very lackluster in execution. Well, that isn’t really true. The first round did it’s job, but the second round is when the tournament’s driving force and reason for being was eliminated. 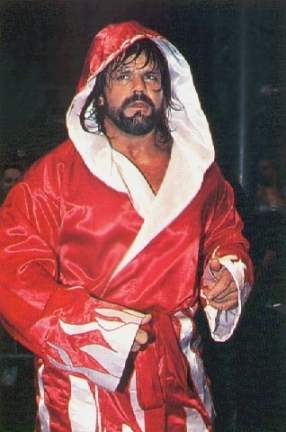 When Vince and company first conceived the Brawl For All, they had intended it to be a push for “Dr. Death” Steve Williams, who had recently signed with the company. The WWE’s bookers had assumed that the legendary Williams would be the man to win it all, plowing down all those who got in his way. Well, that happened in the first round, but he was hammered by Bart Gunn in the second round. When this happened, the WWE saw all hopes of a push for Dr. Death slip right through their fingers.

And, we all know what happened after Williams lost his fight, right? They tried to get him over as a masked ninja, and then as a bodyguard of sorts for Jim Ross. These, too, went the way of the dodo, and Steve Williams’ WWE adventure came to a close. Then, he went to WCW and was right back where he left off in the WWE, but now he was with some jag off ripping on Good Ol’ JR instead of the real deal.

Well, Bart Gunn won the tournament, beating Bradshaw in the finals. And you would have thought that that would have been the end of it, but the best part is yet to come.

I find it funny that the worst match in all the Brawl For All mess was the best part. On March 28, 1999, Brawl For All winner, Bart Gunn faced Toughman god, Butterbean in a special Brawl For All at WrestleMania XV.

Now, WrestleMania XV wasn’t the greatest of the bunch. In fact, most people, like myself, would state that it may be the worst WrestleMania of all time. But, when this match happened, and if you blinked, you missed it. In less than a minute, Butterbean had knocked out Bart Gunn. In fact, giving Bart a minute on his feet in that fight would be kind.

So, in the end, the WWE has pretty much attempted to rid themselves of the bad memory of when they actually tried legit fights, by simply never mentioning anything about it. But, as long as I am still breathing, I will continue to twist the knife into that open wound that is the Brawl For All debacle. While modern sheep-like fans can say that the WWE has done no wrong (and anyone who says that today needs to be drug out into the street and shot), I can just regale them with the tales of Duke “The Dumpster” Droese, the Gobbledy Gooker, and The Brawl For All.

But, since Vince McMahon is into nostalgia right now, I say bring back the Brawl For All. But, rather than a 16 man tournament, let’s just go with 8. With something that has injury written all over it, we need Nathan Jones, A-Train, Big Show, Mr. America, Rosey, Jamal, Goldberg, and Scott Steiner in it. See that, four RAW and four Smackdown! stars. This could be a one night tournament at the Survivor Series. And, if even one of the eight rejects I listed would get injured and be out for a while, then that is one less hunk of wrestling waste to watch on Monday or Thursday.

So, Mr. McMahon, if you are reading this, please bring back the Brawl For All, and let those eight names be the fighters. The fans would really love to see these fine athletes [insert muffled chuckle] fight it out in the ring and entertain the crowd [muffled chuckle turns into a muffled laugh] with their technical prowess [insert insane laughter].

Alright, I’m better now. But, honestly, folks, if the Brawl For All does come back, let us all hope that NWA:TNA or MLW or any other decent promotion gets TV deals by then, so we can all tune in to some real entertainment. Or, we can watch as Vince once more looses some potentially decent talent to injuries suffered in a rotten, short, boxing rip-off.

And the moral of the story is:

If you are a wrestling booker and you want to push a legend, don’t gamble on said legend winning legit fights. Just use the old fashioned rigged fights and ensure that the push will actually work.

Sam Kuypers a.k.a. Makaveli wrote: Tell me, why does the WWE always tries to do other stuff besides wrestling. I mean you are talking about the Brawl for all Debacle, i am talking about the three Tough Enough debacles and offcourse the two Diva searches. You know why the WWE does this, my idea is that the WWE attempts to bring in more “normal” people, not like us. So what do normal people like, legit fights and T & A.
Now if you look at the smaller promotions you will see that they focus more on actual wrestling. They are not trying to get normal to watch their product, because there not even enough not wreslting people watching.
In other words, unless the WWE get’s some real competition from a real wrestling product, they will keep bringing these kind of gimmicks to their show to bring in normal people, so GO TNA!

Related Items
← Previous Story African-American Wrestlers in the WWE
Next Story → If John Cena is the hero then who is the villain?