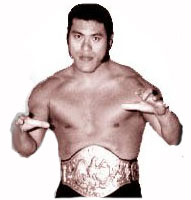 A meeting was arranged in Las Vegas in the fall of 1969. At the meeting was Japan Pro Wrestling Representative, Charley Moto, my father, Dory Funk Sr., NWA President, Sam Muchnick and Myself. Mr. Moto made a financial offer to NWA President Sam Muchnick and I for the NWA World Championship Match, Dory Funk Jr. vs Antonio Inoki and we accepted. We took him at his word as in those days there were no contracts.

My father, Dory Funk Sr. traveled with me on that first trip to Japan. My first match for the NWA World Championship in Japan was in the winter of 1969 against Antonio Inoki. We were both in excellent condition and evenly matched. My Father, Dory Funk Sr. was in my corner.

As the bell rang, I remember Dad saying, “”Don’t let that &%#@! Inoki get the best of you.” I remember thinking, “I hope these people don’t speak English.” (Dad was a combat veteran from WWII serving in the U.S. Navy in the South Pacific) I thought, “Better to fight Inoki than to face the wrath of my father.”

Wrestling Inoki was the kind of match I enjoy, fast paced, competitive and for the highest stakes in the wrestling business, The NWA World Championship. At about the 45 minute mark, I shot for a single leg pickup. Inoki blocked, pushing me toward the corner of the ring. I released and turned using his momentum to crash him backward into the corner. I threw a forearm to his body and one at his chest. In a flash of anger, He swung a punch at me and in seconds, this great wrestling match turned into a brawl.

We fought through the ropes and on to the floor, both of us swinging wildly at each other. In an effort to rid myself of Inoki’s punches, I reached for his head, and wound up with a handful of hair,. I grabbed tight and threw him off. He landed against the announcer’s table and sagged to his knees. With a breath of air, I returned to the ring. As I looked back, my father was standing over Inoki. Dad reached out to help him back into the ring. When Dad touched Inoki, the fans were on their feet protesting. They thought he was going to hurt Inoki. From the second balcony I could see a projectile hurdling toward my Father. It must have been thrown by a pitching ace for on of the Japanese baseball teams. Landing with a thud against my father’s chest was an orange, it split open and there was fresh orange juice running down my father’s new gray silk suit. In anger, dad shook his fist at the balcony.

The final 10 minutes of the match were bedlam. Dad was on the ring apron several times, the fans were on their feet, and periodically oranges would fly into the ring. Now, the bell was ringing. The one hour time limit had elapsed. This match was a draw and I knew I would retain the NWA World Heavyweight Championship Belt. I walked to Inoki, shook his hand and told him, “Great match.”

For Training Schedules at the Funking Conservatory Wrestling School, Call 352-895-4658