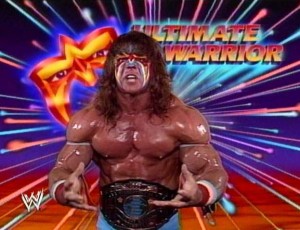 Sting’s World Title reign lasted 7 months, his challengers consisted of Sid Vicoius and the Black Scorpion. Sting defeated Ric Flair at the Great American Bash to win the World Title then losing it back to the Nature Boy in January of ’91.

Both Warrior and Sting respectively had their own individual fan base, and unstoppable runs leading up to their first World Title wins. The WWF and NWA used their biggest pay per view events and their number 1 guys to solidify Warrior and Sting. But once the chase had ended and the straps were given over to the new champs to run with, the excitement kind of wore off.

Could it be that the fans got their happy ending and lost interest, wanted to go back to what they were used to the most ie Hogan & Flair. Or was the old boys club plotting to sabotage Sting and Warriors title reigns?

Forum editor response: I think Warrior got a better deal than Sting as he was paired up with some of the best wrestlers, and that his World Title loss led to a more important scenario which put his career on the line. Warrior most likely had the backing of Vince McMahon and the WWF’s strong, united locker room. Sting would go onto having a fairly good WCW run, but he goes without a World Title for 2 years. The WCW locker room had always been hindered with cliques, and the ‘good old boys’ fraternity which would eventually lead to WCW’s demise.