Home / Miscellaneous / “Are You Serious” – episode #27 with Josh Mathews and Road Dogg!

“Are You Serious” – episode #27 with Josh Mathews and Road Dogg! 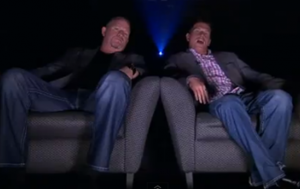 Road Dogg and Josh Mathews return with this week’s episode of “Are You Serious?”, a hilarious episode that includes a clip of the WCW title match where Hollywood Hogan poked Kevin Nash in the chest with his index finger, prompting Nash to fall to the mat in defeat.  The match outcome marked the reunion of both New World Order factions into one villainous group, to which Mathews ponders “how did this company go out of business?”  LOL!

Also featured are clips of Jim “The Anvil” Neidhart appearing on “The Mating Game” on Tuesday Night Titans and a cameraman tripping on stage during an episode of SmackDown earlier this year.

It’s a funny video.  Check it out at: http://www.youtube.com/watch?v=bNlT41xqS60