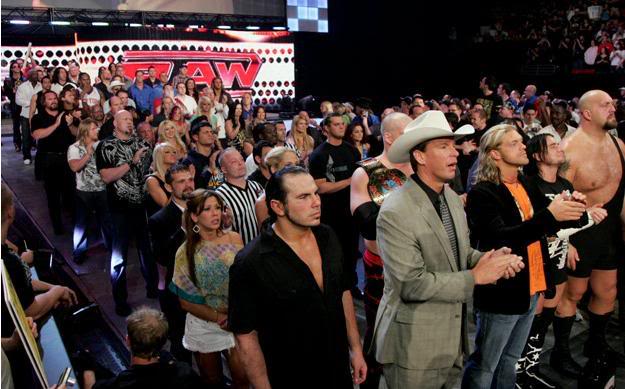 Welcome to The Armpit wrestling quiz for the week of April 17, 2017.

One of the bright spots for 2017 is Shinsuke Nakamura’s debut on the main roster.  What made me think his arrival will have legs is the strong reaction he received on his second week on SmackDown, because that was a “normal” wrestling crowd instead of the hardcores from WrestleMania who had flown in from all over the world.

Nakamura gave a nice farewell speech on NXT last week that made for good television, with the NXT locker room coming out to applaud him (except for Bobby Roode, which was a nice little touch and ode to kayfabe).

It brought to mind other farewells of the past.  The theme of this week’s quiz is “Famous Sendoffs.”

1) When JBL beat up the Blue Meanie at ECW One Night Stand 2005, it wasn’t in a match, but during a post-match brawl in the ring with lots of other wrestlers.  I remember Tracy Smothers getting in a few potatoes on JBL once he found out what happened, and then the following week he went online and challenged JBL.

2) To appease the Meanie and avoid a lawsuit, they booked a worked match between JBL and Meanie on SmackDown, which Meanie won.

3) The one guy who knocked down JBL in a bar fight was… Joey Styles.  Hilarious.

5) Miz was a victim of JBL’s hazing, having been kicked out of the locker room for months.  Seriously, who would even put up with this kind of abuse, and how was it tolerated.

6) JBL should’ve been extra careful not to harass Maura Ranallo because he’s openly bipolar and is at a higher risk for severe depression.

7) Steve Blackman almost kicked JBL’s head off in an airport fight, but unfortunately his leg got caught in a piece of luggage and it was broken up before JBL got what was coming to him.  Damnit.

8) According to more than one witness, JBL wanted Justin Roberts’ passport stolen.

1.  As noted, Shinsuke Nakamura gave his farewell speech on NXT television last week.  At the very end, he celebrated with the NXT locker room, which had come out on the ramp to applaud him.  Which current WWE star (and former NXT star) showed up at the end as a surprise, to further congratulate Nakamura?

2.  Ric Flair’s farewell on the Raw after WrestleMania in 2008 is probably the greatest 20 minutes of television I’ve ever seen.  One by one, Flair’s friends and foes from the past were brought into the ring by HHH, as a surprise to Flair, who was crying his eyes out the whole time.  Truly the ultimate sendoff for a man who truly deserved all the respect being paid to him.  Which of these men did NOT show up that night to congratulate Flair?

3. In 2011, Edge gave a memorable farewell speech to cap off his remarkable career.  Why did Edge retire?

a) To spend more time with his family.
b) He wanted to work in Japan and other indies.
c) To pursue an acting career in Hollywood.
d) His severe neck injuries had caught up to him.

4.  Very similar to Edge’s farewell speech was Daniel Bryan’s retirement speech.  Bryan’s was very emotional as well, and has to rank as one of the all-time great moments on Raw.  I do believe Bryan will wrestle again once his WWE contract is up, but for now, it was a very impactful segment.  Why did Bryan retire?

a) To start a family with Brie Bella.
b) Doctors wouldn’t clear him to wrestle due to his concussion and seizure issues.
c) He wanted to rest up his injuries so that he can wrestle indies and Japan once his contract expires.
d) He wanted a more non-wrestling roles with WWE, doing things like Talking Smack and announcing the Cruiserweight Classic.

5.  Undertaker hasn’t given a farewell speech (yet), but fans created their own sendoff following WrestleMania 33 in Orlando. What did Undertaker leave in the ring as he walked to the back?

a) His gloves, hat, and coat.
b) His urn, which Paul Bearer used to carry for him.
c) A replica of his old WWF world title belt.
d) They lowered a casket into the ring, and Undertaker climbed in, closed it, and the show ended.

6.  ECW created a tag team act so hot, that they got offers from WWF and WCW even though they were very limited in the ring.  But in ECW, they shined.  The Public Enemy were a huge success, owing to the genius and creativity of Paul Heyman.  Heyman named Public Enemy’s final show at ECW Arena after them, in 1996.  What was is called?

7.  Sting gave a speech on Raw after his Mania match with HHH, which aired only on the WWE Network (much like Goldberg’s excellent speech this year).  I was in attendance for that speech, which he left open ended.  He ended up wrestling again, suffered a career ending injury, and gave what ended up being his farewell at his Hall of Fame speech in 2016.  Whom did Sting wrestle in his final match where he got injured?

a) HHH in a rematch from Mania.
b) Brock Lesnar, who suplexed him too hard.
c) Seth Rollins, who threw him into the turnbuckles too hard.
d) Kevin Owens, who landed on him too hard doing the cannonball.

8.  In one of the saddest, most eerie series of events in wrestling history, the Ultimate Warrior passed away just hours after giving what ended up being his farewell speech on Raw.  What was Warrior’s role at WrestleMania weekend that year?

a) He wrestled a retirement match.
b) He was inducted into the Hall of Fame.
c) He was the guest referee for the WWE title match.
d) He gave the trophy to the winner of a battle royal, which was named after him before it was named after Andre the Giant.

9.  Shawn Michaels gave a farewell speech on Raw after losing a retirement match to the Undertaker at WrestleMania in 2010. Michaels said, “Shawn Michaels has left the building,” which is what the ring announcers used to say early in Shawn’s singles career. What is that saying a reference to?

a) Nothing, it was a heel move to get fans to boo Shawn.
b) It’s a line in his “Sexy Boy” theme song.
c) It’s an inside rib and joke that has never been publicly explained.
d) It originated at Elvis Presley concerts, and WWF copied it.