Home / Miscellaneous / AS I SEE IT Bob Magee — PWBTS.com

AS I SEE IT Bob Magee — PWBTS.com

AS I SEE IT Bob Magee Pro Wrestling: Between the Sheets PWBTS.com

This Saturday will make it eight years.

This Saturday will make it eight years ago… on September 8, 1999, when Brian Hildebrand died after fighting a two year battle against cancer. 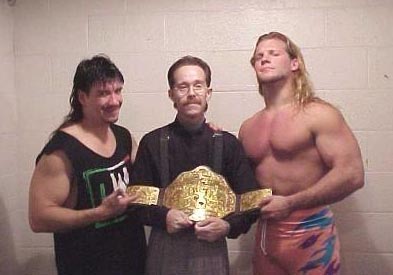 Â There are few people within wrestling who were held in such universally high regard at the time of their passing. When people eulogized Brian, the words they used weren’t the kind that social obligation or courtesy often require.
The words used by all who knew him, worked with him, and were fans of him, were deep and heartfelt, epitomized by Mick Foley, when he said about Brian in his best-selling book Mankind: Have A Nice Day: “Brian brought out all the better angels of our nature”.

Back at the time of his death, it was said that there were only two people in the entire wrestling business without enemies: Brian Hildebrand and Owen Hart. Neither are with us today.

He was such a special person that he inspired everyone who knew him…whether friends, family, fans, or co-workers… to frequently share our feelings on such a funny, dedicated, committed individual who was and always will be an inspiration to live each day of our lives to their fullest… and to follow our dreams, no matter how impossible they may seem.

The recent events involving Chris Benoit have given several of the memories I’m about to share more than a little added poignancy.

As I said in the 1999 column right after Brian’s death…it was almost eerie, yet at the same time totally expected, when I got the news while in a funeral home at a wake for the uncle of a friend, after being called by a family member via cell phone.

I’ll always remember Brian Hildebrand as a man who lived for and loved the wrestling business more than anything else on this earth, except for his beloved wife Pamela. He got to live his dream of making a living in wrestling as referee “Mark Curtis” for Smoky Mountain Wrestling and World Championship Wrestling. Brian Hildebrand was a man who lived to the last day of his life with more courage than anyone I’ve ever had the privilege to know.

As most longtime readers know, Brian fought stomach cancer for nearly two years, after being initially diagnosed in October 1997. But he refused to allow cancer to stop his incredible spirit and his wonderful sense of humor.
He seemed amazed and somewhat embarrassed at all the attention his battle with cancer received.

Jim Cornette and Sandy Scott, AND work as referee “Mark Curtis” all at the same time. He always did this with such unfailing patience, good humor, never forgetting to still be a fan of the very business he worked in. That’s the reason why he always used the word “Mark” in his ring name.

My frequently-told and favorite Fanweek story involves the time in August
1994 at Fanweek that I had to go with Brian to Knoxville’s West Town Mall to get Jim Cornette a new tennis racquet (a local fan had taken it upon himself to steal Jim’s racquet at a SMW house show the night before). Brian and I went to a sporting goods store and got the racquet. The clerk fell all over himself meeting “Mark Curtis”.

I stood and watched. As the clerk rang up the purchase, he asked me “Can I help you, sir?”. I replied, in full kayfabe mode, “I’m just here with Mr.
Curtis”. We walked away into the Mall to grab lunch, and Brian asked me, “How in hell did you just do that?” My reply was “Because you and Jimmy taught us to remember that your folks down here ‘still believe’.” It can safely be said that Brian Hildebrand did that very thing for his entire career in the wrestling industry.

Chris Jericho/Eddie Guerrero against Dean Malenko/Chris Benoit… and with Ric Flair and the Four Horsemen presenting Brian with a championship belt, then getting Brian involved in the finish to count the pin. That Knoxville show was an event reported all over the wrestling world, and not just for the quality of the matches.

Brian kept himself going through such sheer will and determination despite a physically devastating form of cancer that he actually refereed a match for Southern States Wrestling only days before his death. He had the often-expressed hope of returning to work fulltime for WCW, and never gave up that dream.

(bottom row right with a blue shirt in the picture), the only woman among a group of guys, smaller than all the rest…not giving up on her dreams. No doubt, she reminded Brian very much of himself.

While a small man in stature, Brian showed us all a giant heart that is an example for us all. There’s no doubt in my mind whatever that he would have admired it in someone like Liz Malone. But there is little question who the person most deserving of admiration really was. During the 2001 Curtis Fantasy Camp, Brian would have especially appreciated another moment; what friend Jeanette Gogan-Olivier described as:

“…an unforgettable, heart felt speech by Ricky Steamboat which spoke about the heart of true wrestling. Pam Hildebrand said that Ricky’s words were moving, and that Brian would have approved because this was what the whole day was about, and what Brian Hildebrand was about. None of us in attendance will ever see the business the same…”

Brian could appreciate most any style of match, but he appreciated most an old-school attitude toward wrestling which showed respect for the business and those who make the sacrifices to succeed in it. There’s no doubt that he’d have been honored to have Ricky Steamboat participate in anything he was associated with…and amazed at the same time to be honored by Steamboat in an event bearing his name.

It can be said that at the time Brian Hildebrand left this world, he knew he was loved and respected by all within the business he himself loved so much.

Two days after Brian died, I took a trip down with friends to the Baltimore Arena to a WCW house show. The show began with WCW announcer David Pinzer announcing the news to those who hadn’t read the news online or seen the mention on Thunder. Pinzer then signaled for the traditional 10 bell salute.
It was a special moment for the group of us that knew Brian well in attendance. Many of those working the show wore black armbands in tribute to him.

Charles Robinson, who was with Brian and the family when he passed away; as well as Scott Dickenson, were given special greeting by those of us who knew their relationship with Brian. The group of us made sure that we gave Dickenson his traditional rib about donuts (one that Brian gave us to get Scott with at the first Philly Monday Nitro). Our seats were close enough that he clearly saw and heard it.

Then late in the show, after a Chris Benoit-Bam Bam Bigelow US Title match; Shane Douglas, Chris Benoit, and Dean Malenko came out in an out-of-character moment, and dedicated the evening’s show to Brian with heartfelt words for their friend.

It may have only been a WCW house show for most of the relatively small Baltimore Arena crowd that night. But it was a way for those of us who were there together to say goodbye to Brian in the most appropriate atmosphere possible…a wrestling show.

For those who wishing to send their thoughts to his wife Pamela on the anniversary of Brian’s passing, or to send contributions to the Brian Hildebrand Memorial Fund; you can do so at the following address: Pamela Hildebrand-Clark, 353 Don Carsen Road, Telford, TN 37690

Rest in peace, dear friend. You are still, five years later, missed more than you can ever know.

For those of you who would like to read more about Brian, the new and improved version of the website dedicated to him has now been re-created by Jeanette Gogan-Oliver in his honor, and is located at Brian Hildebrand.com.

On the website, you can read the thoughts of people within wrestling about Brian…a list including Chris Benoit, Bob Ryder, Chris Jericho, Mark Madden, Mike Johnson, Dave Meltzer, Dave Scherer, Diamond Dallas Page, Dory and Marti Funk, Bill Apter; as well as many other fans and friends of Brian.

If you’d like to add advertising on PWBTS.com (the flagship website of this column), banner ads are available for $400 for one year. These ads would appear on each newspage appearing on the newsboard. Cube ads are available for $200 for one year, which would be placed on the main newsboard page. For advertising requests, I can also be reached by e-mail at [email protected].
Until next time…