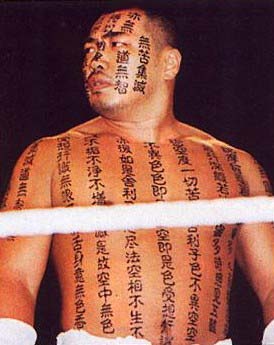 Sad news to start as Chris Jericho has reported online that Japanese and former WWF star Jensei Shinzaki (aka Hakushi) is currently living out of his car, as both his home and restaurant were destroyed by the earthquake/tsunami’s effects.

For the most up-to-date information on the status of shows in Japan and news on the welfare of Japanese and other workers who were on tour in Japan, go to Puroresu Representin’. It’s likely they’ll also have word on the Japanese talent scheduled to come over for the CHIKARA King of Trios weekend and New Japan supershows in the Philadelphia/New York area.

Even with the situation in Japan, Combat Zone Wrestling’s crew has gone over to tour for Big Japan Pro Wrestling and is apparently safe. There’s a show tonight at Korkuen Hall pretty much happening as you read this…with four other shows in the Tokyo area on as scheduled.

Here are ways for readers to help the people of Japan.

The American Red Cross has already added “Japan Earthquake and Pacific Tsunami” as one of the choices for online donations at this link. Gifts will support disaster relief efforts to help those affected by the earthquake in Japan and the tsunami throughout the Pacific. Alternatively, you can simply make a $10 donation by texting REDCROSS to 90999. The Japanese Red Cross has already mobilized eleven teams to heavily-damaged communities to provide assessments, first aid, and emotional support and relief.

Save the Children is accepting immediate donations to its Children’s Emergency Fund earmarked for the ravaged area.

AmeriCares is sending two three-person teams to the Iwate and Miyagi prefectures in Japan and is accepting donations.

International Medical Corps is responding to the health needs of the disaster’s victims.

MercyCorps is gathering donations for its overseas partner, Peace Winds Japan, which currently has personnel on the ground distributing emergency relief in Japan.

The Salvation Army is on the ground in Japan already. Their website can be found for donations at this link.

The Salvation Army is also accepting text donations. Text the word Japan to 80888 to make a $10 donation to support its relief efforts. The Salvation Army says it is sending a team to Sendai, the most heavily damaged city, tonight and tomorrow will start providing basic necessities.

Other ways you can help via text donations:

To donate to Convoy of Hope, a faith-based organization that does community outreach and disaster response, text TSUNAMI to 50555
To donate to GlobalGiving, which focuses on “grassroots projects in the developing world,” text JAPAN to 5055
To donate to Save the Children, an independent organization dedicated to helping children in need, text JAPAN to 20222
To donate to World Relief Corp., the humanitarian arm of the National Association of Evangelicals, text WAVE to 50555

Keep in mind that the FBI advises people not to respond to any unsolicited emails claiming to represent organizations. It’s much better to go directly to recognized charities and aid organization’s websites. You may also want to check out the legitimacy of the nonprofit organizations.

To conclude, a reminder about three killer shows this spring at the ECW Arena….first, the return of Germany’s Westside Xtreme Wrestling, Combat Zone Wrestling’s tenth annual Best of The Best tournament, and CHIKARA Pro Wrestling’s King of Trios all in April; then concluding with the historic May debut of New Japan Pro Wrestling here in Philadelphia. Thing start off on April 9 with an ECW Arena doubleheader, where Germany’s Westside Xtreme Wrestling makes its United States return in an afternoon show to start at 2:30 pm. Westside Xtreme Wrestling debuted in Philadelphia last March, with their “Vision” event featuring a brutal main event of wXw’s Thumbtack Jack and Drake Younger and dream matches including Alex Shelley vs. Chris Hero and wXw Tag champions Switchblade Conspiracy defending against The American Wolves.

In the main event, Japan Deathmatch Icon Jun Kasai takes on the “Golden Boy” Drake Younger! This match is the most anticipated by all fans of Hardcore Wrestling….and they will collide in a No Ropes Barbed Wired Match! So many legendary Barbed Wire Matches have been seen by Arena fans, but “Kasai vs. Drake” will open a new chapter of violence. To balance things, technical wrestling fans will see Zack Sabre, Jr. and Emil Sitoci, who holds victories over Japanese top cruiserweights CIMA, Taiji Ishimori and Yoshinobu Kanemaru. Last June, Sabre beat Steve Douglas to unify the wXw lightweight and heavyweight titles to win wXw’s first “Unified World Championship”, a title eventually lost to the massive Austrian Big van Walter. Elsewhere on the show, Big van Walter and Sami Callihan will also be in action. Visit Westside Xtreme Wrestling’s United States site for the latest news and ticket information on wXw’s U.S. return! Early purchases of fronyt row tickets are available via e-mail [email protected] with the topic “wXw Philadelphia First Row”.

CHIKARA Pro Wrestling comes to the world’s most famous Bingo Hall for King of Trios 2011 on April 15-17. Belltimes are 7:30 pm on Friday and Saturday and 4:30 pm on Sunday for the finals. All 16 trios will be in matches the first night of the tournament, which is Friday, April 23. The surviving eight teams advance into Night 2,and the 4 remaining teams will face off until just one remains on Sunday afternoon, As the participants are confirmed for the tournament, you’ll see them listed on this very page. There will also be non-tournament matches featuring wrestlers eliminated from King of Trios on the last two nights.