AS I SEE IT: NJPW and JAPW 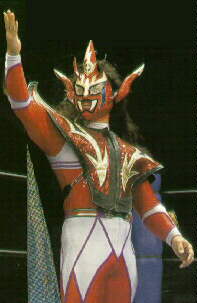 The first New Japan Pro Wrestling I ever saw was from a bootleg tape dealer (remember those things called tapes, everybody?).

I remember watching Chris Benoit and Jushin Liger working a match in the ring and and being absolutely blown away. I had a family member walk in the room this one day, who only knew wrestling as Hulk Hogan and the usual Titan Toon Adventures on Saturday mornings and afternoon (yup, folks, there was actually a time when there was no Monday Night RAW). She looked at the screen…actually stopped and watched some of their match, and said “This is really something different, isn’t it?”
Ya think?

At the time there was no way to legitimately (from the companies themselves) get Japanese tapes of New Japan, All Japan, and this company called All Japan Women, where the women might well have worked harder and as well as the Japanese men legitimately. There was no Internet where you could go and look up things like that. You talked to friends who had gotten tapes, found out where they got them from. You went to wrestling tables at independent shows and looked for tape dealers, and hoped the quality was reasonable decent…not too many skips or burps from tapes that had been copied over and over again.

Later I found that one of the first reputable ones with a real Japan connection and tapes where the tape quality was actually viewable was George Mayfield As readers of my site know, I’ve plugged George’s stuff for years on my PWBTS site because he’s a good guy and has given a lot of people the opportunity to go to Japan.

Many of the shows were from a place called Korakuen Hall, which always looked full and a crowd that seemed to understand and properly appreciate what these men and women were doing in the ring. As I found out from George Mayfield, Korakuen wasn’t some sort of huge shrine to wrestling…not entirely anyway. It was on the third floor of a shopping mall in downtown Tokyo…not much different from our own ECW Arena in being unique and not some super-elegant Madison Square Garden type venue. It was far cleaner, fans who behaved…well, differently than the fans at the Arena.

So, when Frank Iadevia of Jersey All Pro Wrestling announced that the New Japan Pro Wrestling crew was coming over to the east coast…I was stunned. Here was a chance to see some of these wrestlers at the ECW Arena, our own little Bingo Hall.

Rahway is easily reachable from all points in New York. Go to Manhattan’s Penn Station, and take the New Jersey Transit Northeast Corridor train line to Rahway Station. Walk about 3/4 mile to the Rahway Recreation Center. Go to NJTransit.com for further information.

Fair warning: tickets are not cheap, plus there is a $4 convenience fee for tickets purchased through the website. Tickets are Gold (Row 2/3) $65, Blue (row 4/5) $45 Red (GA) $25 and can be ordered at this site. Fans that purchase a GOLD ticket will receive a special meet and greet with NJPW Superstars efore the doors open, as well as, a commemorative ticket and DVD gift (redeemable with ticket the night of the show).

The tour moves on to Manhattan on Saturday, May 14 (8:00 pm belltime) at Basketball City, Pier 36 @ South Street, New York, NY with a main event for the IWGP Jr. Heavyweight Title of Champion Prince Devitt against Low Ki and the semi-finals of the IWGP Inter-Continental Championship.

In Manhattan, go to Penn Station, and take the 3 subway to New Lots Station, then walk to Pier 36; or go to MTA’s website for further information.

On Sunday afternoon, May 15, (5:00 pm belltime) the tour concludes at the ECW Arena at Swanson and Ritner Streets. Announced thus far: A South Philadelphia Street Fight with Togi Makabe vs. Rhino and a JAPW Light Heavyweight Title match of Champion Jushin Thunder Liger vs. Kenny Omega, and the finals of the IWGP Inter-Continental Championship

If you have comments/questions/event announcements/results, if you’d like to add the AS I SEE IT column to your website, or if you’d like to add advertising on PWBTS.com (the flagship website of this column), e-mail me at the address above. Advertising consists of banner ads, available for $400 for one year. These ads would appear on each newspage appearing on the newsboard. Cube ads are also available for $200 for one year, which would be placed on the main newsboard page

Related Items
← Previous Story My Tribute to Miss Elizabeth
Next Story → AS I SEE IT: Remembering Sputnik Monroe