Home / WWE / AS I SEE IT: Remembering Owen Hart

AS I SEE IT: Remembering Owen Hart 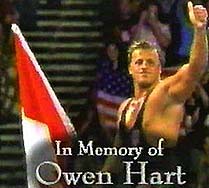 Today makes 12 years since one of the darkest days on wrestling history, as Owen Hart died as the result of a botched spot from the ceiling at the Over the Edge PPV on May 23 at the Kemper Arena in Kansas City, MS. Oddly enough, last night was the airing of the slightly re-named Over The Limit PPV
Here’s the column that followed that tragic day:

If there were any doubts of that fact before, there were none after May 23rd, a night which will be remembered for one of the worst tragedies in the history of the wrestling business. Along with millions, I watched the Over the Edge pay-per-view that night at home. It was a pay-per-view starting out pretty much like many WWF pay-per-views, with Jim Ross and Jerry Lawler trading their usual entertaining banter.

Then, as a video package promoting the match between “The Godfather” and Owen Hart for the Intercontinental Title began, I could hear Jim Ross say “something’s gone wrong…”. When the video package finished, the camera was showing a crowd shot. At first, I didn’t understand what had happened. Then the faces and the words of Jerry Lawler and Jim Ross made it clear that something had gone horribly, tragically wrong.

Ross, stunned, said over and over again that what had happened was “not part of the storyline” and not “a wrestling angle”; trying to communicate to the world-wide PPV audience what had just happened: Owen Hart, while attempting a ring entrance in his “Blue Blazer” character descending on a wire from the ceiling, had fallen approximately 50 feet to the ring, hitting his head on a turnbuckle, breaking his neck. Hart was given CPR in the ring in front of the live audience at Kemper Arena and then taken to Truman Medical Center, where he was pronounced dead. Shortly afterwards, Jim Ross made the announcement of Hart’s death to the PPV audience.

On Tuesday, there were reports from a local Kansas City radio station and the Kansas City Police Department stating that the apparent cause of the fatal accident was that Owen Hart was reaching up to grab onto the harness; but instead accidentally hit the release, causing his fall.

In the “show must go on” spirit that wrestling has, taken from the “carnys” that wrestling’s roots are born in, the Over The Edge PPV continued until its conclusion. But the toll on the people who had to perform for the remainder of the evening had to be beyond measure, and was very obvious to the viewing audience, which saw Jeff Jarrett, Debra McMichael, Brian (Jesse James Armstrong) James, and Duane (Rocky Maivia) Johnson barely keeping their composure through scheduled promos during the PPV. I have to say I felt numb for most of Monday. I noticed that Dave Scherer of 1wrestling.com described much the same feeling. I’m sure we weren’t the only people who felt that way.

Because on May 23rd, a man known for tremendous talent… for a sense of humor legendary within the wrestling business… and known for his great love for his wife Martha and his children Oje and Athena… was taken from this world far, far too soon. I think I had this feeling so strongly because I’ve had the privilege of seeing the human side of the business and writing about it. These are very real people that work as professional wrestlers. They aren’t just characters to me….

Indeed, real men do cry. On May 24th, many of them did. That night, the staff and workers of the World Wrestling Federation dedicated their two hour Monday Night RAW to their fallen friend and co-worker in a moving tribute at the Kiel Center in St. Louis. The irony of the location had to be painful for the entire Titan crew, as only 18 months previously, Brian Pillman was mourned by the WWF and the fans after his death earlier that day alone in a hotel room hundreds of miles away in Minneapolis. The ten bell count was sounded as the entire Titan staff came out under a picture of Owen Hart on the Titantron. Many of those there were openly weeping for Hart, most notably Brian (Road Dog) James, Mark Henry, and Paul (Hunter Hearst Helmsley) Levesque.

Monday Night RAW had numerous segments, with wrestlers and office personnel expressing their feelings about Owen….many of which were humorous, telling of Hart’s legendary “ribs” in the locker room and on the road. Other reminiscences were deeply felt, by friends like Paul Levesque, Jeff Jarrett, Debra McMichael, and Brian James, repeatedly breaking down while sharing their feelings with the TV and live audiences. Inbetween these segments were matches dedicated to Owen Hart, devoid of existing storylines, so that as many wrestlers as possible could work matches to pay tribute to their friend. Special mentions of Hart were done all night by the boys, using special forms of all the traditional tag lines of most of the wrestlers.

The RAW tribute ended with Jerry Lawler and Jim Ross saying their last goodbyes, finally being able to let go after keeping it together for a pay-per-view and international TV/cable broadcast over a 24 hour period. Ross said, sobbing, that “…he hoped he could be as good a man as Owen had been, so he could see him again (in Heaven) some day.” But the remark that got me crying was Jerry Lawler…the same Jerry Lawler who in real life can seem so hard-boiled and old school. He said: “I learned a valuable lesson from Owen Hart last night. As I got into the ring, and held…lifted up Owen’s head in the ring…if he could have had one more thing…he would have asked for one more day to tell the people he loved what he thought of them. Never leave home without letting the people in your life know that.”

The show then ended with Steve Austin coming out to the ring, with his house show tradition of bringing out two beers, often handed to referee Earl Hebner. In a silent tribute that spoke louder than any words, as a graphic of Owen Hart was shown on the Titantron…with tears in his eyes, Steve Austin opened up his beer…toasted the picture of his friend, then quietly laid down a lone beer on the mat.

In a welcome touch, even rival company WCW paid tribute to Owen on WCW’s Monday Nitro; where a brief memorial was done for Hart, with Tony Schiavone and Bobby Heenan speaking briefly, having a hard time keeping their composure while doing so…

PWBTS’s news feed is now also available at Wrestle World, which can be found at Pro-wrestling.com.

Related Items
← Previous Story A Tribute to the King of Harts (Owen Hart)
Next Story → BG James opens up about his sobriety issues on OWW Radio, archive online NOW!