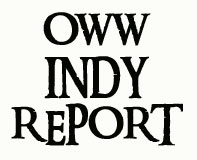 he ASW Heavyweight champion Simon Sez and the Northeast Allstars made their way out to ringside. Eric Cooper spoke first for the group, demanding Aaron Epic and Josh Rayne come to the ring. It appeared Cooper was trying to get Epic’s attention by making fun of Rayne. Sez said it seemed like months that they have wanted Epic to come back to the team he founded with Cooper. He told Epic this was as close to the championship belt he was going to get unless he dropped the child. Things were left confusing as Epic left Rayne alone in the ring.

Decay came out…but to Da’ Biff’s ring music. Decay took the mic and told the fans last week he devastated Da’Biff last week and the fans will NEVER see him in ASW again. O’Neil wasted no time and jumped Decay at the bell. Decay tried to slow things down but O’Neil kept on the attack, using Decay’s beard to Beal him across the ring. Decay slid to the floor for some personal time with himself before O’Neil followed out. The chase was on and it ended when Decay beat O’Neil to the ring and made him pay when he caught him in the ropes and dropkicked O’Neil in the chest. Decay was mocked by the fans as he used the ropes to choke out O’Neil. Decay went to win with a rear chinlock submission but O’Neil fought to his feet, only to run into a forearm smash. Decay dropped for a backdrop but was taken down in a sunset flip for two and this got O’Neil his second wind. O’Neil thought he had the match won with a K5 but Decay kicked out of the pin. O’Neil went on the ropes but Decay bumped into the ref, who fell into the ropes which made O’Neil fall on his ass. This allowed Decay to get the cheap win.

Before the match Chicago mocked Fanta for his ring attire, entrance music and overall look. Fanta asked for his ring music to play again and he danced for the fans who cheered, until Chicago jumped him. Chicago proceeded to use every dirty trick in the book trying to defeat Fanta. Funny thing happened, Fanta kept kicking out of every pin attempt. Chicago told the fans he was going high risk, which was a splash off the bottom rope for two. He opted for an abdominal stretch then releasing into a mat based stretch. Chicago mocked Fanta’s dancing and he decided to dance across the ring which allowed Fanta to hit a Rock Bottom. Fanta kept on the offense with several high impact moves. He blocked a corner kick and hit a Code Breaker but got two. Chicago fought back but was rolled up by Fanta. After the bell Chicago decked Fanta and left with the championship belt.

This match actually began as Romeo taking on Justin Cade for about six minutes. The match was good but two people mocked the hell out of it the whole time, Santee & Steel. Santee was the first one to hit the ring, hitting the Big Dump. After the duo laid out both men, Santee said they came to kill ASW calling it an insult to the business. Not to be outdone Steel said he was tired of kids who watched Japanese DVD’s calling themselves wrestlers. Steel said no one in the locker room was man enough to come out and shut his mouth.

It took Fame and Taylor to get focused on the match after Santee & Steel’s tirade. But once they did Taylor went to work on Fame’s left arm and shoulder. Fame tried to counter out of the holds but only ended up back on his rear end. After as cheap shot Fame locked Taylor in a side headlock and thanks to some trickery, he ended up taking control of the match. Fame got too close to the ropes and ended up being clotheslined to the floor. Taylor followed over hitting a bodyblock into what looked like a DDT. The action came back to the ring and Fame got in a knee lift as Taylor entered. Fame went back to work on the neck area with a chinlock. Taylor fought to his feet and was able to hit a missile dropkick and neckbreaker to defeat Fame.

(5) In an opening round tournament match to determine a # 1 contender to the ASW Heavyweight champion, Michael O’Toole defeated Shane Swyft of the Northeast All Stars and Josh Rayne.

Swyft slid to the floor with his bodyguard to watch the other men beat on each other. That ended when O’Toole got close to the ropes and Swyft tripped him up, dragging him to the floor. Rayne followed out hitting both men with a tope’. Swyft dragged Rayne back into the ring while the bodyguard and O’Toole fought on the floor. O’Toole finally got in the ring as Rayne hit Swyft with a headscissor. Rayne had O’Toole pinned when Swyft came back in the ring and drove Rayne into a corner shoulder first. Rayne broke up a pin attempt by Swyft and hit a flying dropkick as Swyft laid in a corner. Swyft recovered and kicked both men in the head, getting a two count on O’Toole. The match ended up on the floor again with Swyft hitting a spinning plancha. Swyft dragged Rayne into the ring as the bodyguard once again beat down O’Toole on the floor. O’Toole finally entered the ring as Rayne was going for a cross bodyblock, actually catching Rayne. This allowed Swyft to hit a double knee drop from the top. Swyft went up to hit O’Toole with a move but Rayne sent him crashing to the floor. Rayne thought he had the match won when he went for Sliced Bread #2 but O’Toole countered into Forces of Nature to get the pin.

Both men traded moves in a sort of feeling out process which was cut short several times as DWB complained to the referee about phantom hair pulls and tight pulls. The offense ended for Romeo when DWB stopped a corner move and dropped Romeo to the mat. Living up to his name, Dirty White Boy used all the dirty tricks he could use to try and defeat Romeo. Romeo tried to fight back but got hit with a Rock Bottom into a backbreaker. DWB made a cardinal mistake by letting his opponent get some recovery time and he paid for it as Romeo got a second wind. The match ended when Romeo damaged DWB’s left arm and he hit a moonsault onto the arm.

The ASW Heavyweight champion Simon Sez was sitting at the DVD commentators table and he wished both men good luck in kicking each others’ asses. The match started out with Taurus using his power to toss Epic around the ring. Epic tried to mat wrestle but Taurus countered out of a hold into a side headlock which Epic escaped, tossing Taurus to the floor. Taurus had no room to breathe hitting a dropkick baseball side style. The match ended up back in the ring with Taurus getting control, hitting a standing suplex for two. Taurus kept on the attack with forearm shots and chest chops. Epic fought back with forearms of his own but got sent back to the mat thanks to a Taurus clothesline. Epic fought back once more hitting a discus forearm and clothesline which sent both men to the mat. Epic got on the attack with a dropkick to the knee and then face for two. Epic hit a splash to the corner and a facewash but got two. Epic avoided a corner move but not Taurus’ powerslam. It allowed him to go up and hit a top rope legdrop but got two. Epic fought back hitting an enziguri and spear for two. Taurus fired back with an enziguri of his own but found himself locked in a Crippler Crossface but the time limit expired. As both men went to shake hands, Eric Cooper and Shane Swyft jumped them. They fought to the floor and Epic was alone in the ring, which allowed Josh Rayne to come out…and turn on Epic. Alex Decay came out and showed everyone that Rayne was infected. Both men challenged Simon Sez to a championship match next week. Sez said yes both men didn’t lose but then again both men didn’t win, so they are super losers. Sez accepted the challenge saying he didn’t need ASW management to sign off on it. Epic and Taurus guaranteed that Simon Sez would not be walking out of Strokers next week the champion.

Sez wasted no time going on the attack only to be taken down to the mat by an armdrag. Money kept on the left arm with a knee to the elbow. Sez ended up on his butt after a huricurana and several armdrags. The offense was stopped thanks to a distraction from the executive consultant on the floor and Sez hit Money from behind. But Sez made a mistake and got hit with an inverted atomic drop and he went to the floor with Money following out. The action got too close to the fans and one of them threw ice in Sez’s face. This seemed to wake Sez up as when the match came back to the ring, he made sure money ended up on his ass in pain. Sez used every trick and help from his consultant to keep Money on the defensive for several minutes, but he couldn’t keep Money on the mat for three. But Sez missed a knee drop and to give Money time to recover and recover he did, hitting Sez with several dropkicks. A Mexican legsweep led to another two count as the consultant tried to break up the count. Money hit a missile dropkick but also got only two. Sez recovered and hit a Black Hole Slam but got only two to the shock of himself and the consultant. Money fought back with a sitout facebuster for two. Money went up top a third time and the consultant sent him crashing to the mat. The ring crew came out and dragged the consultant to the back.  For some reason the referee followed and it allowed Eric Cooper time to slide brass knuckles into the ring which Sez used to knock out Money.

For more information on ASW log onto www.aswfl.com or www.wrestling911.com