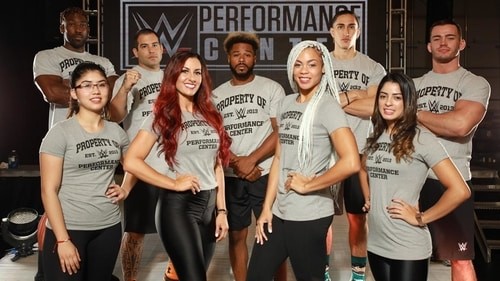 WWE.com is profiling nine new signees to the company. One of the signings is current EVOLVE Champion Austin Theory, who was shown at ringside at NXT TakeOver: Toronto this past Saturday. All nine signees reported to the WWE Performance Center this week.

Austin Theory, called by his real name Austin White in the article, is the current EVOLVE Champion. Theory has faced NXT Superstars in the past as part of NXT’s relationship with EVOLVE. Theory has faced Roderick Strong, Johnny Gargano, and NXT Champion Adam Cole. Theory defeated JD Drake at the EVOLVE 10th Anniversary Special in July to win the WWN Championship.

A winner of the Cauliflower Alley’s Future Legends Award in 2014, Santana Garrett has signed with WWE. Garrett has appeared on NXT TV in the past, as well as competed in the inaugural Mae Young Classic. She is a second-generation wrestling, having been trained by her father “TNT” Keny G and has been mentored by WWE Hall of Famers Larry Zbyszko and Scott Hall.

Miles is a United States Army veteran and a former Division I football player for the University of Maryland Terrapins. Miles attended WWE Performance Center tryouts in 2017 and 2018 and has wrestled on the Maryland independent scene.

Champion bodybuilder and former professional football player for the CFL, IFL, and AFL, Nduka brings a background of mixed martial arts and boxing to the Performance Center. Nduka attended tryouts in 2018 and early-2019.

Known as LX Ken while wrestling for the past few years in Germany, Jaksic is a former semi-professional basketball player. Jaksic is a graduate of Santino Marella’s Battle Arts Academy and has also trained under former WCW wrestler Alex Wright.

Having worked with Soulja Boy and Jadakiss as a hip-hop hopeful, Brandy has experience in ninjutsu and extreme CrossFit.

Reis attended the December 2018 tryout in Santiago, Chile, she won gold in the Abu Dhabi World Professional Jiu-Jitsu Championship in 2017.

Gomes has a specialty in Jiu-Jitsu and trains in boxing and wrestling. Gomes is also an instructor in Muay Thai.

Kashin made his professional wrestling debut in 1992 and has held Junior Heavyweight Championships for NJPW and AJPW. He was also named the 22nd best wrestler on the PWI 500 in 2002.

Kashin recently served as a guest coach at the WWE Performance Center in February 2019.