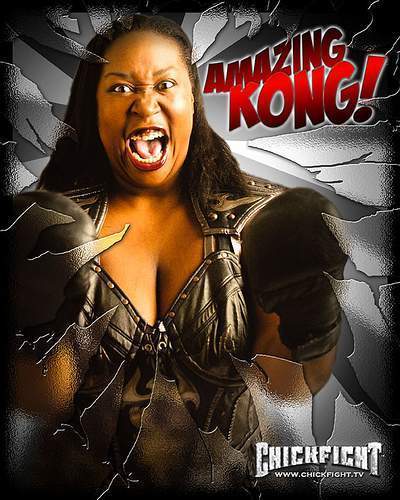 Awesome Kong  Discusses How Close We Are To Seeing Her In The WWE (And A Potential “Dream Match” vs. Beth Phoenix), The Chances Of Seeing Her Return To TNA, How TNA Has Changed As A Company Since Leaving The Company In March, Playing The Role Of “Mediator” Between The TNA Knockouts, Tara‘s TNA Departure, The Rumors Of The Current Knockouts Locker Room Environment, How Gail Kim‘s Leaving Impacted/Affected The Company, What She Has In Store For Ring Of Honor At “Supercard Of Honor V” In New York City This Saturday, Being A Part Of The Forthcoming BTW WrestleFest 2010 Lineup, & Her Future In Wrestling

Awesome Kong joined The Big Mosh & “The Chairman of the Board” Todd Vincent for her debut on “Your Home of Wrestling Radio” (to promote the May 22nd BTW WrestleFest 2010 at The Marriott in Fremont, CA), which is now available in Windows Streaming Media or via Monday Night Mayhem’s official Podcast on ITunes:

How the transition has been for Kong since leaving TNA several months ago: “The transition has been great. I’ve been taking better care of my body and easing up on the wrestling & my schedule a bit, and I have the opportunity to pick & choose when & where I work, so that has been fabulous. I’m also going back to basics, and going back to Japan this week, and just reinventing & bringing back a more aggressive Kong.”
How she believes TNA as a company/as a whole changed from her debut in the fall of ’07 to her departure in the month of March & if she can now envision herself returning to TNA after the chain of events over the past week: “Well, there were some differences towards the end. They have offered to leave the door open should I want to come back, and that is something I’m also open to. Just right now, I came to this before all the changes happened. People think that because I left right when the changes happened, that I left because of the changes, and that’s not really so. This was gradually coming on, and I my body needed a break, and I just needed to regroup and figure out exactly how I wanted my character to go & the direction I wanted it to go. It’s (TNA) definitely a different product in the little that I have watched. The X-Division isn’t has prominent as it used to be, and that was one of the reasons I came to TNA. When I was Japan, the X-Division DVD’s were like crack on streets. That has changed a bit. So I’d like to see that come back full force. They’re trying new things, and I wish them well, and hopefully the things they are trying works out for them.”

How the Knockouts division changed/altered over the course of the past three years during her time in TNA: “When I first came to TNA, there was an ambiance that everyone was a team. Backstage, everyone supported one another, we were all together as one, and we worked together as one to grow as a company. Everyone was putting in back-breaking work & putting in their all, because we were depending on one another to make something big happen. I think when things started to get bigger, I guess people got comfortable. I won’t say cocky, but maybe a little comfortable, and the fire wasn’t there anymore. People just got comfortable where they were or discouraged & stagnant.”

Playing the role of “mediator” amongst the TNA Knockouts, the rumors of the current TNA Knockouts locker room environment, & her thoughts on Tara’s forthcoming TNA departure: “I’ve heard idle reports about the locker room musings. When I was there, things like that didn’t go on. Not to say people didn’t have disagreements, but when I was there/if something came up, I would usually step in & be a mediator for whatever was going on, because we would like to keep a harmonious vibe in the locker room. It’s very important to come to a happy workplace, so when I was there, I did my best to make sure everyone was emotionally safe & physically safe in the ring. When I worked with Tara, I found her to be very professional, and if she had a opinion that varied from someone else, I found her to voice that opinion in a professional manner. These reports that I’m hearing, they may be true, and I’ve heard things have changed since I left. The air there has changed; it’s a different air from when I first arrived that.”

The WWE’s interest right now in her, what she can bring to the table if hired by World Wrestling Entertainment, & the likelihood/chances of herself, Gail Kim, & Tara (as Victoria) together again as part of WWE’s Divas division: As far as Tara, Gail, & I working together in the future, I believe Tara would have a great chance of going back to the WWE. She started there, and I believe they would take her back. As for myself, their product is a bit different, and I don’t fit the ‘diva model’ persay. I do believe that if I was there, I would back them a lot of money. They have some of the most creative minds in professional wrestling, and I believe if they choose to pick me up, that everyone would make money all around.”

Her message to her fans around the world & her reaction to the tremendous support she has received throughout the past week: “I lace my boots up for my fans. The years I spent in Japan put a lot of damage on my body, and there are things I want to do outside of wrestling. I would like to become a mother someday, and that’s a whole adventure on its own. The fans are what keep me going, who want to see more, and they keep my name out there. I get Facebook messages everyday, I get Twitter messages every day, people sending me e-mails on my website all the time wishing that I was back in ROH, or WWE, or TNA. I lace my boots every time for the fans…that’s why I’m still in the game. I do have outside interests, as I just established a non-profit foundation, and there’s many I want to accomplish before this life is over, because I plan on living my life till the wheels fall off, and wrestling is a big part of it. I’ve put a lot of time into it, and the fans have put a lot of time into me, and I would never want to abandon them. So I’m taking this time to figure out exactly how I would pursue furthering my career in wrestling.”

In Kong’s most revealing interview of her career, she also goes in-depth with The Big Mosh & “The Chairman of the Board” on her candid & uncensored thoughts on the potential “dream match” between herself & the current WWE Women’s Champion “The Glamazon” Beth Phoenix (and just how close we are to having that become a reality), having the opportunity to meet with Jim Ross & “Stone Cold” Steve Austin at the Cauliflower Alley Club recently (and the influence both have had on her career), how Gail Kim’s TNA departure affected the locker room & the Knockouts division especially, what she has in store for the Ring of Honor fans this Saturday night at The Manhattan Center in New York City (as part of “Supercard of Honor V”), the concept behind her teaming up with Raisha Saeed in TNA, whether being a face or heel was more satisfying for her career, & so much more. You’ve heard the dirt throughout the past week & enough “Bubba” references to last a lifetime…now it’s time to hear Kong’s comments on her past, her present, & her future exclusively on Monday Night Mayhem’s “Sweeps Month.” Follow the path of Kong via her official Twitter account (located at http://www.Twitter.com/AwesomeKong), plus you can also meet the former TNA Knockouts Tag Team Champion (along with Bret “The Hitman” Hart, Tommy Dreamer, & many of your favorite superstars) Saturday, May 22nd at the Big Time Wrestling WrestleFest 2010 at The Marriott in Fremont, CA. For more information (including how to be both the convention & the live wrestling show), log onto http://www.BTWrestling.com.